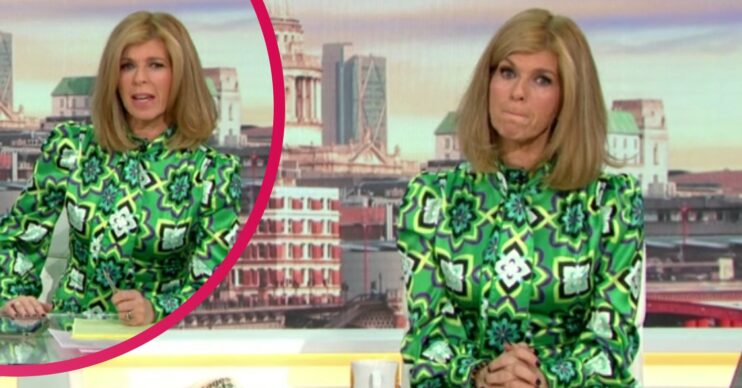 The 54-year-old’s patterned green outfit led to some unflattering comparisons from some fans of the show!

It’s only her second day back on the show after the Christmas break, and already plenty has happened to Kate to get viewers talking.

Yesterday it was her hair dye disaster that was a topic of conversation, and today it’s her outfit that’s got tongues wagging!

The dress she wore had a floral pattern to it, with hints of purple, yellow, and white in there too.

It didn’t take long for GMB viewers at home to begin poking fun at Kate’s outfit, with many asking why the star looked as though she’d been plucked out of a completely different decade!

It’s safe to say that not everyone was a fan of Kate’s green number on GMB today.

“Nice to see Kate Garraway has recycled the luxury Christmas wrapping paper into a dress to wear to work,” one viewer tweeted.

“Why is Kate dressed as a carpet from the 1970’s?” another confused viewer asked.

“Kate I’m sorry but it looks like your wearing a 1950s curtain!” a third said.

“Loving the dress Kate is wearing this morning, what gorgeous colours,” they tweeted. “Where is it from?!”

This isn’t the first mishap Kate has had with fashion this week on GMB.

Just yesterday she explained to hosts Susanna Reid and Ben how “bewildered” she was at how ginger she’d become over Christmas after attempting to dye her own hair.

“Hair root dye,” Kate replied sheepishly. “Even Bill [her son] said ‘I don’t think anything can save this, mum.'”

However, despite her worries, she revealed that some solid shampooing had calmed it down a little bit.

What do you think of Kate’s outfit? Leave us a comment on our Facebook page @EntertainmentDailyFix and let us know!