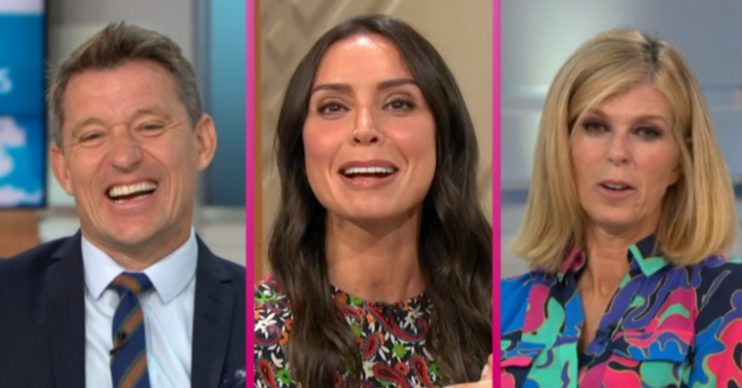 GMB host Ben Shephard left his daytime TV colleagues red-faced with a rather risqué comment he made to Christine Lampard, after the show featured a ‘Ben blanket’.

On Good Morning Britain today (Tuesday, August 4), Ben and his co-host Kate Garraway had a laugh as they aired a clip of Ben’s upcoming ‘cameo’ in Coronation Street.

During a chat with Weatherfield actress Patti Clare, they saw footage of a scene in which Ben is revealed as her character Mary’s crush.

What did Ben Shephard say about the blanket on GMB?

Hilariously, Mary has a comfy-looking blanket printed with pictures of Ben’s beaming face.

Shortly after, the GMB presenters talked to Christine – who is currently working as a stand-in host on Lorraine – about what viewers can expect on her programme.

But they also spoke about the blanket – and Ben made a risqué comment, and Kate joked that social distancing is something to be thankful for.

Kate asked: “Christine, would you have a Ben blankie? Would you love to snuggle up with one?”

Christine replied: “Absolutely, it’s a no brainer. I can’t believe it’s not more of a thing. It’s taken Corrie to draw attention to our love of Ben.”

Ben quipped: “Finally, Christine, I’m being appreciated in a way that I should be appreciated.”

Come and get the real thing.

“I’m with you entirely Ben,” Christine told him. “I’ll have mine on Monday keeping me cosy, don’t worry about it.”

Ben then said: “I’d say you can come and get the real thing, but social distancing says we can’t…”

At that, a shocked Kate laughed: “Thank god for social distancing!”

Elsewhere, Ben revealed that his pals had been giving him stick for the blanket since the Corrie clip aired.

“I am getting a lot of grief from my friends about the Ben blanket,” he admitted. “Apparently there’s orders already gone into the golf club, they’ll be in the golf shop.

“Two of my friends… they’ve already put in orders. My friend John said, ‘I watch Corrie all the time, I can’t believe you’re going to be on the cobbles’.”