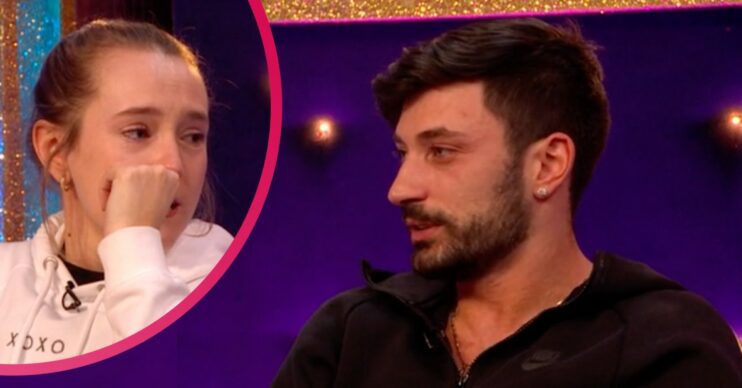 The pair, tipped heavily by the bookies to win the Strictly Come Dancing 2021 final, were also left sobbing.

That’s because of a special moment that went down between the two as Giovanni paid emotional tribute to his partner.

He admitted that Rose has been the “most beautiful thing that ever happened in my entire life”.

What did Giovanni Pernice say and do to Rose Ayling-Ellis on It Takes Two?

Ahead of this weekend’s final, Giovanni and Rose both broke down as he reflected on their BBC run together.

The Italian gushed about how privileged he was to have worked with the EastEnders actress.

He insisted the sky is the limit for anything Rose may wish to achieve in the future.

Giovanni said: “Personally I think Rose deserves the most beautiful things in the world. She just realised that she can do everything she wants.”

‘We made a big impact’

The couple have been tipped to emerge victorious ever since their affecting ‘silent’ dancing moment, hailed by many viewers as a TV highlight of the year.

And Giovanni referenced how they had been appreciated by audiences as he continued with his heartfelt words.

You are the most beautiful thing that ever happened in my entire life.

He continued: “I think we made a big impact. You are the most beautiful thing that ever happened in my entire life so I’m very grateful and very privileged to be the one able to do the journey with you. So, thank you.”

It Takes Two viewers admitted on social media how they were in bits over Giovanni’s words.

One fan tweeted: “Rose and Gio making me sob I’ve loved their friendship soo much.”

“Was it just me who cried their eyes out at Rose and Giovanni on #ItTakesTwo?” asked another.

And someone else wrote: “Cried my way through #ItTakesTwo and Rose and Giovanni have my heart.”

Oh my goodness, Rose and Giovanni on #ItTakesTwo…I’m sobbing! Such a beautiful partnership #Strictly pic.twitter.com/PGD3biQQeC

Another tweeted: “Sobbing watching #ItTakesTwo Rose and Gio just give me pure joy and I don’t know how to deal with the emotion.”

Rose and Giovanni face off against John Whaite and Johannes Radebe for the Glitterball trophy after AJ Odudu withdrew due to injury.