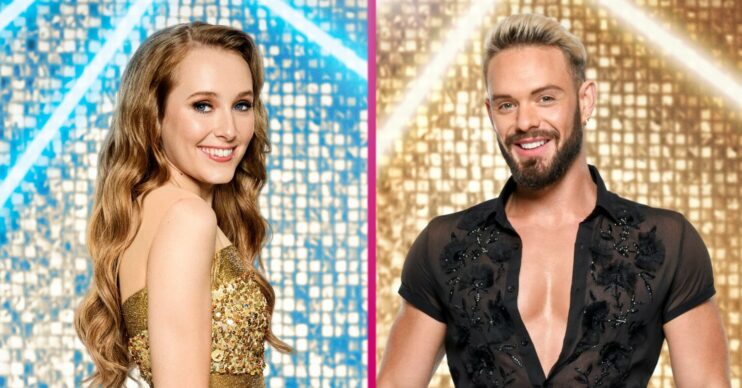 With AJ's exit, one couple have become clear favourites to win

With the Strictly final tomorrow, bookies have revealed the favourite to win following AJ Odudu‘s devastating exit due to injury.

AJ and her dance partner, Kai Widdrington, were forced to pull out of the competition the day before the final due to AJ’s ankle ligament injury.

Why did AJ pull out of the Strictly final?

AJ revealed on Wednesday, December 15, that she had picked up an injury, just days before the Strictly final.

In an emotional appearance on Strictly: It Takes Two on Wednesday evening, AJ revealed the true extent of her injury.

“I’ve suffered some traumatic injury to my ligaments,” AJ said. She then went on to say that she was ok on Monday, but once rehearsals were over, the pain started.

“The pain came on so suddenly and acutely that I actually projectile vomited,” the 33-year-old admitted.

Earlier today (Friday, December 17), AJ and Kai announced that they had pulled out of performing in the final. Both stars said they were both “gutted” that they had to bring their Strictly journey to a premature end.

In a heartfelt tribute to his co-star, Kai said she was the best partner he “could ever have asked for”.

With AJ and Kai out of the competition, that just leaves two couples left to fight it out for the Glitterball trophy.

Rose Ayling-Ellis and her partner Giovanni Pernice will be going up against John Whaite and Johannes Rabede in Saturday’s final (December 18).

The couple’s fates won’t be in the judges’ hands this time around. It will be entirely down to the voting public as to who comes out on top at the end of Saturday’s show.

The show is expected to be shorter now thanks to AJ and Kai’s exit.

Who are the favourites to win Strictly now?

Following AJ and Kai’s exit, the winner odds have once again shifted.

According to Betfair, Rose Ayling-Ellis and Giovanni are clear, clear favourites to win the 2021 series of Strictly. The odds for the couple to win are currently 1/25.

Read more: Strictly’s John Whaite admits final ‘won’t be the same’ without AJ and Kai as he speaks out on their ‘devastating’ exit

John Whaite and Johannes Rabede, on the other hand, are 8/1 to win this year’s series.

Viewers will never know now what the odds for AJ and Kai to win would have been had they remained in the competition, which is a shame.

The Strictly final airs on Saturday, December 18 on BBC One and BBC iPlayer at 7 pm.

Do you agree with the odds? Who do you think will win Strictly this year? Leave us a comment on our Facebook page @EntertainmentDailyFix and let us know!