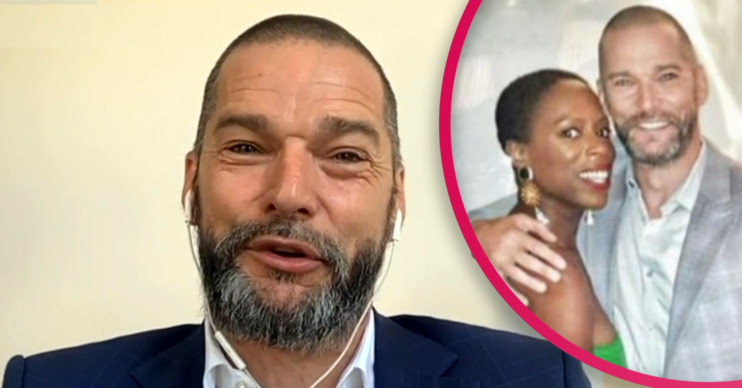 The First Dates star got engaged in March

Fred Sirieix opened up about his upcoming wedding on GMB today (July 28).

The First Dates star rarely talks about his personal life so the insight was a treat for fans.

He popped the question to his fiancee, who he affectionately refers to only as Fruitcake, in March earlier this year.

When asked how he did it, Fred told presenters Ben Shephard and Kate Garraway: “It was perfect because she said yes – that’s the main thing.

Read more:  Who is Fred Sirieix’s wife-to-be and does the First Dates Hotel star have children?

“The only thing is though is I did not get a ring.

But I’ve now managed to do it because we are out of lockdown so the ring is there and she  is very happy.

The star is planning to tie the knot in Jamaica.

Originally, the couple were hoping to walk down the aisle next year but they had to postpone plans due to COVID.

Fred explained: “We’re waiting to see when we can travel because it’s important for all of our friends and family [to be there].

“We have to be patient and see what is going to happen – it is out of our control.

Fred went on to admit that he and Fruitcake are not rushing their wedding planning.

Instead, they want to take their time and make sure the big day is perfect.

“We have slowly started looking at wedding venues and where we are going to do it,” he added.

“But there’s no rush and we are keeping all of our options open.”

Ben went on to question Fred about rumours claiming Gino D’Acampo and Gordon Ramsay are planning his stag.

The star laughed and confirmed: “Yes!

“But listen, it’s going to be fun. If Gino organises the stag do, I think that we are all going to have a good time.”

He added: “Fruitcake was having nightmares but I reassured her it’s all going to be good so she shouldn’t worry too much.”