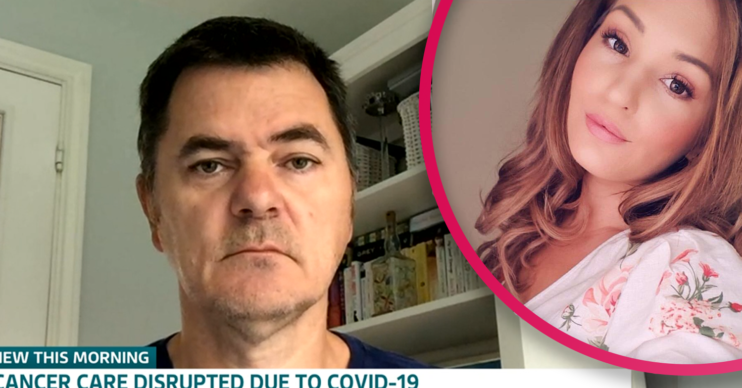 GMB viewers rushed to sign a petition to fight cancer this morning (July 28).

Speaking on Good Morning Britain, he told Kate Garraway and Ben Shephard her life was cut dramatically because her treatment was stopped.

He said: “The principle thing is that due to Covid-19, the chemotherapy cycle that Kelly was on was suspended because of the risk of her catching Covid.

“The chemo was the one thing effectively keeping her alive so putting that on hold allowed the cancer to spread quickly.

“It shortened her life significantly.”

He added: “It was unbelievably difficult.

“We knew from early May what the prognosis was from a timescale point of view – Kelly never really wanted to know.

“But we knew we had very limited time. By May 4th, we knew she had two to four weeks to live because the cancer had spread so aggressively that she was encountering liver failure.

“So we were trying to make the very best we could from what little time she had left.”

Due to COVID-19, one in three cancer treatments have suffered delays.

According to Cancer Research UK, 38,000 treatments haven’t taken place because of the pandemic and it’s costing lives.

Following the tragic loss of his daughter Kelly, Craig has launched a petition called called Catch Up With Cancer.

It’s calling on the government to take urgent action and prioritise cancer treatment as 35,000 patients are at risk of dying unnecessarily because of the impact COVID has had on services.

Craig explained: “From our point of view, continuing with the chemotherapy would have been the right way to go.

“You have to acknowledge there was always the possibility that Kelly could have caught COVID-19 and that indeed may have killed her rapidly.

Read more: When is Piers Morgan back on GMB?

“But the other side of the coin is the chemotherapy was treating something that she did have and was keeping her alive.

“Which ever way you look at it, there would have been a risk.

“But I would have treated what was in front of us in terms of the cancer instead of worrying about something that she didn’t have.”

After watching Craig’s interview, GMB viewers tuning in at home were quick to sign he petition afterwards and voice their concerns on Twitter.

One wrote: “Petion signed maybe boris should reconsider £50 voucher for bike repair and put the money back to the nhs for the people who are waiting on cancer treatment bikes can wait cancer patients can’t.”

Another added: “So desperately sad. Sorry for the loss of your beautiful girl.”

Craig Russell recently lost his daughter Kelly to cancer and is calling for urgent action to prevent cancer deaths as a result of treatment delays.

Her chemotherapy programme was suspended due to Covid-19 which he says shortened his daughter’s life significantly. pic.twitter.com/0GNOfQwSxy

Moments later, a third wrote: “So sorry to hear this. I don’t understand why the chemo couldn’t be administered in safety in a hospital.

“And the other option was to have the treatment at home. Thoughts and prayers with her family.”

Shortly after, a fourth. wrote: “Thank you Good Morning Britain for highlighting the plight of cancer patients who have had their care disrupted.”