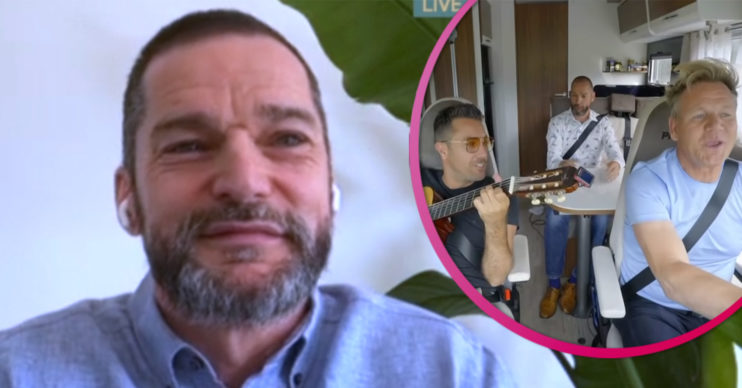 The ITV series is expected to return sometime this year

Fred Sirieix has revealed he, Gordon Ramsay and Gino D’Acampo aren’t agreeing on a location for their next series of Road Trip.

The trio have explored Europe and the United States in separate series for their ITV show.

However, Fred said they can’t come to an agreement on the next destination and it’s even resulted in Gordon almost slamming his laptop during during Zoom meetings.

What did Fred Sirieix say about the new series of Road Trip?

Speaking on Friday’s This Morning, Fred said: “We’re talking [about the new series] at the moment.

“We had a conversation a couple of weeks ago. We are planning to go away this year. We’re dying to go back on the road.

“We’re discussing destinations, we don’t agree at the moment where we should be going.”

He added: “[Gordon] almost slammed his computer down the other day on Zoom because he didn’t agree with what Gino was saying.

“I was just left here holding the baby but such is life in our relationship.”

We don’t agree at the moment where we should be going.

The chef, 54, told the Radio Times: “The landscape is still unsure when it comes to travel, so we are still working out where and when.

“But it will be the usual circus of me and Fred trying to find out about the food and culture whilst Gino completely clowns around causing mayhem wherever we go.”

When will the next series begin?

He added: “It’s genuinely ridiculous that we get drive around amazing places, eating, drinking, experiencing true adventures filming it for TV and calling it work – how bloody lucky am I?!”

Read more: Gordon, Gino and Fred: Road Trip: When will it be on again? Gordon Ramsay gives update

Over the course of these next three years, fans will see two new series and two Christmas specials.