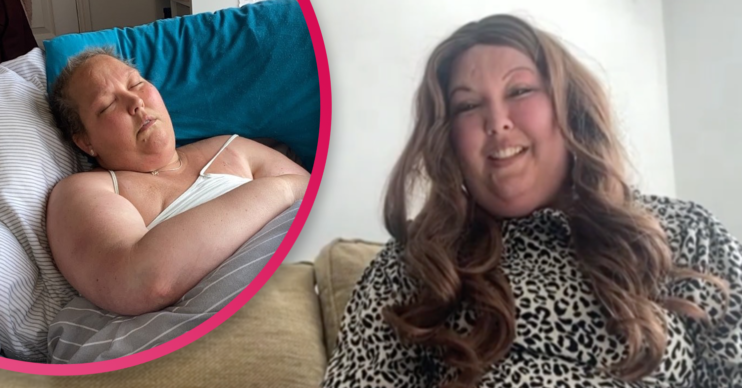 The family of This Morning competition winner Heather Bone have issued a heartbreaking update as she continues to battle cancer.

Heather appeared on the ITV daytime show last month. She won £2,000 in the Dosh on Your Doorstep competition.

She explained to Alison Hammond, Holly Willoughby and Phillip Schofield that she is battling an aggressive form of cancer. She added that doctors had given her just three months to live.

This Morning competition winner: What did Heather’s sons say about their mum?

Posting to Instagram Stories, the boys shared an update about their beloved mum’s health.

They revealed she has suffered a “big seizure”. And, as a result, she can no longer “communicate properly”.

They also shared a picture of Heather lying in bed looking pretty poorly.

The post read: “Last night Mum had a big seizure which has had a big effect on how well she was doing.

“It’s caused her to be unable to communicate properly and [she] is very fed up that she feels this way as she still has so much stuff she wants to do.”

The boys added: “She wants to let you all know that she’s okay and she’s trying to stay alive for as long as possible.”

Late last month, Heather made a second appearance on This Morning and revealed that she was planning on holding two farewell parties.

Her first with her family went ahead last week, while her second with her friends is due to take place on July 31.

Friends and family have also set up a fundraising page for Heather to ensure her sons are looked after following her death.

If you want to donate, you can do so here.

So what type of cancer does This Morning favourite Heather have?

Speaking to Alison on her This Morning debut, Heather revealed she had been diagnosed with breast cancer in 2019.

She said: “I had the all-clear just before my 40th birthday and thought things were getting back to normal.

“But then I got told I had brain mets, so now I’m getting myself organised because I’ve been told I have three months to live.”

Head to our Facebook page @EntertainmentDailyFix and send your best wishes to Heather.