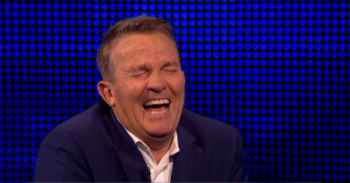 Bradley was in bits over "priceless" quiz situation

The Chase presenter Bradley Walsh was left doubled up in laughter after a question on the ITV game show tickled his funny bone.

Plenty of those watching at home were also in hysterics over the cheeky question, which featured a character with the surname ‘Crotch’.

But it was the series of possible answers that flashed up on screen that really seemed to set Bradley off with a fit of the giggles.

However, Chaser Mark Labbett seemed faintly bewildered by just how funny Brad found the situation, closing his eyes and shaking his head as he allowed himself a little smirk at the reaction.

He also later looked off to the side as if he couldn’t believe how much the host was milking it.

But despite titters from the studio audience and viewers expressing their mirth on social media with ‘crying laughter’ emojis, one person who didn’t appear to see it as a laughing matter was contestant Roger.

“19th century composer William Crotch was also famous as a player of what instrument?” Bradley asked, seemingly up for a laugh.

However, it was the three possible correct answer options – ‘oboe’, ‘bagpipes’ and ‘organ’ – which really cracked him up.

“That is absolutely priceless,” a hysterical Bradley roared before turning to the quiz player.

Roger, however, did not seem as convinced.

Apparently shocked Roger was not in hysterics, Bradley’s grin froze in disbelief.

But both Roger and The Beast selected the right answer – ‘organ’ – which got Brad going again.

“Oh Billy Crotch plays with his organ,” he repeated, knowingly, almost with a wink and a nudge.

Another Twitter user echoed Brad’s remarks, adding an emoji to show they got the gag, too: “‘Old Billy Crotch plays with his organ?’ #thechase #gangofchase”.

Spelling out the punchline, another viewer tweeted: “Crotch organ #TheChase.”

And a fifth observer concluded: “William Crotch the composer plays with his organ! Bradley Walsh in stitches! The Beast how did you keep a straight face! @MarkLabbett @ITVChase #TheChase.”