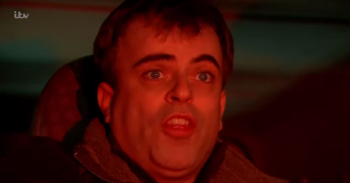 Is Steve going to be caught up in a terrifying situation?

Coronation Street is reportedly lining up a knife crime horror for Steve McDonald.

The cabbie will be held at knife point by an evil thug for a harrowing new storyline and he could even be stabbed, according to a new report.

Steve – played by Simon Gregson – will get in trouble with the law in the coming months when he stops at a garage to allow his fare to pick up some flowers and it all takes a terrifying twist.

Instead of just shopping and paying for his goods, Steve’s customer decides to rob the place at knife point.

He is going to flee the garage after robbing the joint and turn Steve into his getaway driver.

Read more: Coronation Street star reveals it was her idea to kill off character

And if that isn’t bad enough, Steve will find himself being blamed for the robbery completely.

But other reports have suggested the plot will be played for laughs, despite the serious subject matter.

A show source told The Sun’s Bizarre column: “Iain [MacLeod, Corrie boss] is keen to make sure that Corrie is not all big stunts and doom and gloom.

The source added: “Steve has had his fair share of bad luck over the years, but getting caught up in a robbery then being accused himself is new even for him.”

Most recently Steve has been trying to help his family come to terms with his daughter Amy’s, 14, secret abortion.

The teenager took the decision to terminate her pregnancy after falling pregnant with evil thug Tyler’s baby.

But is there more heartache in store for the McDonalds?

What do you think of the knife robbery storyline? Leave us a comment on our Facebook page @EntertainmentDailyFix and let us know what you think!