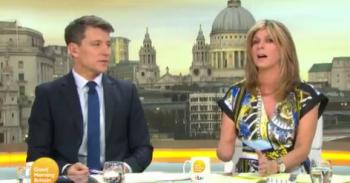 She asked host Charlotte Hawkins, "Who are you?"

Jade Goody’s mum Jackiey Budden appeared on GMB in an emotional but chaotic interview on the 10th anniversary of her daughter’s death today.

She was on the ITV morning show with Jade’s widower Jack Tweed to talk about the late star’s battle with cervical cancer and her legacy. But things turned awkward as the interview got underway.

Jackiey, 61, begged viewers to “get their willies and fannies checked” during the live chat with Dr Hilary, before then asking GMB co-host Charlotte Hawkins, “Who are you?”

When Jade’s mother suddenly questioned who Charlotte was towards the end of their interview, presenter Kate Garraway had to intervene.

Kate, 51, said: “This is Charlotte,” before explaining to the Charlotte and the audience: “The only reason she said that is because we knew Jackiey from back in the day.”

Jackiey then said to 43-year-old Charlotte: “Oh sorry we haven’t been introduced.”

Kate added: “You must have seen Charlotte from watching the show?”

To which Jackiey said she had but that they hadn’t been introduced properly.

Read more: Jade’s sons to fundraise for Marie Curie on the 10th anniversary of her death

Before that, Jackiey and Dr Hilary had also had a bit of an awkward exchange.

He tried to explain if all women attended their smear tests “we’d save about 83 per cent of cervical cancer deaths in this country.”

Jackiey then argued that men can help prevent the virus now too. She said: “The boys can have injections now … but it’s like a kick in the teeth.

“The boys can have it now so I think if you have a son or a daughter, why can’t you get your son to protect him from passing it? And the girls, we can’t have a smear test until we’re 25 now. Which is a liberty.”

Jackiey also became tearful as she spoke about Jack’s marriage to Jade. They wed just a month before she died on March 22, 2009.

Jack, 31, also opened up on the show. He revealed he is back in contact with Jade’s teenage sons, Bobby and Freddie, who she had with Jeff Brazier, after coming out of his “downward spiral”.

He explained that he’s found it hard to have another relationship since Jade’s passing, but Jackiey added that Jade would “want” Jack to “be happy”.