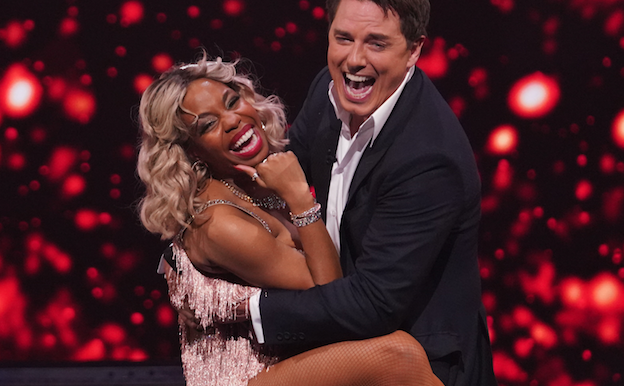 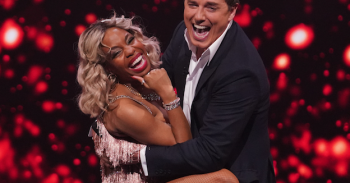 John Barrowman was lucky not to get a shoe in his face!

London Hughes has confessed to having a bit of a thing for Strictly darling Kevin Clifton.

The comedian, 29, got the thumbs up from All Star Musicals scorer Kev after entering a crowd-pleasing performance on the new Sunday ITV talent show.

It seemed she may have flattered the dance pro into giving her full marks after the actress admitted having a crush on Kevin the judge from Grimsby.

Having given her all in a rendition of ‘Roxy’ from musical Chicago, London was interviewed by show host John Barrowman. But he was more focused on teasing glam London over her “new boyfriend”.

However an excited London bowled over John and just missed catching him with her high heels as she twisted into a provocative pose – aimed at Kevin as a joke.

And as John continued to wind her up, a breathless London pretended to flirt to curry favour with the five-time Strictly winner.

Despite Kev’s promises, he only awarded London with four points for her performance.

However, he did lavish her with compliments.

“Just the right balance of sass and subtlety,” Kevin said.

Returning a similar remark made by London, he added: “And I think you’re gorgeous, well done.”

Thank you so much for all your lovely comments! This show was huge for me, I’m gutted I lost my voice 2 days before the show but thrilled you guys loved my performance anyway! I’m drunk cos I’ve had lots of champagne and so thankful for all the support ❤️😩🙈