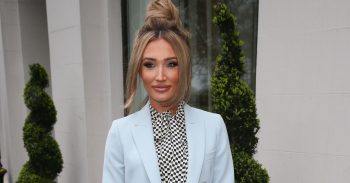 ED! has been told Megan has chosen to grieve in private

Heartless trolls have attacked TOWIE star Megan McKenna in the wake of the death of her ex-boyfriend Mike Thalassitis.

Mike was found dead on Saturday morning, and several of his friends and reality co-stars have paid tribute to him online.

But so far his ex-girlfriend has chosen not to share her grief with the public, angering some fans.

Some have taken their anger too far and accused her social media silence of demonstrating indifference.

There have even been unpleasant suggestions from vile trolls that their break up might have contributed to his death.

“She loved him so much that she hasn’t even paid her respects,” another fan said.

“If you loved someone as much as you say you did are you not gonna help them or stick by them through depression and help them get better or are you just gonna go out and live your life instead of saving a life,” a third person remarked.

“I’m sorry but how have you not yet posted on your ex’s death?” another fan asked.

A representative for Megan has confirmed to ED! she has chosen to grieve in private for the time being.

Megan’s fans rushed to defend her against the insensitive accusations, claiming she has the right to grieve in her own way.

“What the hell is wrong with people? I’m no fan of her but this was a man she once loved until very recently, have a heart and show some empathy, no one deserves to be abused or made to feel guilty over someone else’s decisions no matter how much you want to blame someone,” one person commented.

“She doesn’t have to pay her respects on social media though does she. Maybe she is grieving privately?!” another fan said.

Some fans pointed out that social media isn’t a real indication of what’s going on in someone’s real life.

“You don’t have to write on social media to pay your respects,” one fan commented.

“What do you think people did before social media to pay their respects exactly? Get a grip & leave the girl alone. Trolls.”

Another fan added: “You’ll find that the people making the least amount of a publicity stunt are the ones feeling it the most. These are real people. They aren’t here solely for our entertainment.”

They had apparently discussed marriage and kids before the relationship suddenly ended.