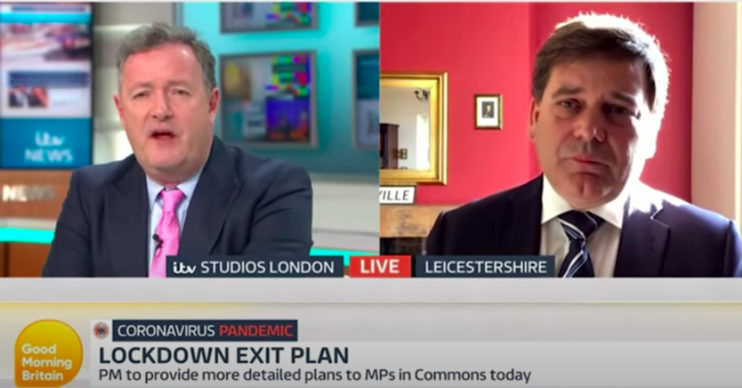 The pair had a heated exchange on Good Morning Britain.

The pair exchanged a heated war of words on Monday morning’s GMB.

The MP of North West Leicestershire went on to appear on TalkRadio and predict that Piers Morgan would be fired soon.

Andrew said: “I’ll have a little bet he won’t be fronting that programme by Christmas.”

Piers defiantly hit back on Thursday’s GMB by declaring his own bet against Andrew’s prediction.

“Put your money where your mouth is”

He said: “As for the bet, I think I’ll still be here until Christmas, I’m contracted until the end of next year so I think it’s quite likely.

“We can put it to a charity of your choice or mine whoever pays up so if you’re prepared to match your billy big balls talk on TalkRadio with hard cash then I’m here. If not – pipe down.”

They fell out when Piers accused the government of failing to properly handle the coronavirus crisis in the UK.

Speaking to Andrew via video link Piers expressed his confusion over the new lockdown rules.

He asked if he could now visit his adult sons, Andrew said he could as long as he upheld social distancing guidelines.

“Haven’t got a clue”

He said: “What you have just said is completely against the new rules as stated.

“There you are, as a Conservative member of parliament, who thinks you know exactly what Boris Johnson has been saying and yet you just told me to do something that I am not allowed to do.

“You, as a leading, high-profile Conservative politician, haven’t got a clue about what these rules actually mean.”

Andrew accused Piers of spreading “diatribe” against the Prime Minister.

Piers refused to back down and pointed out that the UK has one of the worst coronavirus death tolls globally.

He continued: “Let me explain what my diatribe is. We have, according to the government’s own graphs, and you can spin them any way you like, the second worst death toll in the world.”

Piers’ argument with Andrew has led to 281 Ofcom complaints made against him.

Do you think Piers will still be on GMB this Christmas? Share your thoughts with us on our Facebook page @EntertainmentDailyFix.