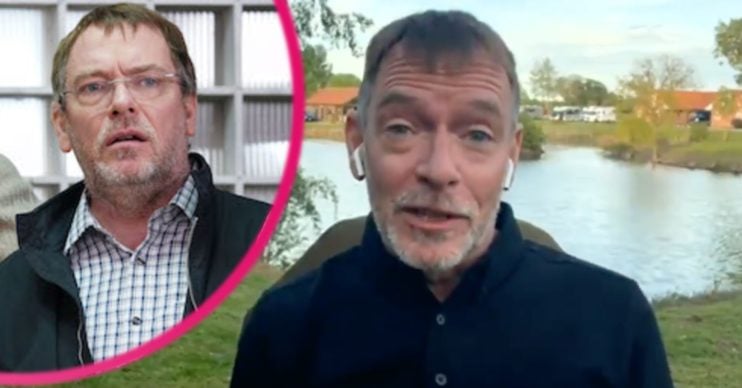 He also discussed his future on the soap

EastEnders star Adam Woodyatt has been praised by The One Show viewers over his slimline appearance.

The 52-year-old actor showed off his weight loss on the BBC One programme on Thursday evening (May 13).

During the appearance, Adam also opened up on Ian Beale‘s future on the Square.

Adam spoke to hosts Alex Jones and Ronan Keating from his idyllic motorhome.

Explaining his surroundings, he said: “Well I am off to do a theatre tour.

“I was supposed to start it in January, then it was April, then it was June, finally we are starting in July, in Leicester, before going all around the country, all the way up until the end of October.”

Later on in the chat, Ronan quizzed the soap star on his return to EastEnders.

The star is currently on a break after spending decades playing his famous character.

However, he’s unsure when he’ll be back.

The actor admitted: “I don’t know that’s the honest answer. The tour at the moment runs until the end October and my daughter’s then getting married in America so I’m off there to do that.

“There’s a possibility – and I really hope that does happen – the tour carries on will run until the early part of next year to pick up the dates we’ve had to postpone because of the lockdown.”

Furthermore, Adam said: “So, if the tour carries on, I’m not going to be back on EastEnders until sometime 2022 at the earliest! Sorry!”

Meanwhile, The One Show viewers praised Adam for taking a break from the much-loved soap.

One said: “To be fair to @AdamWoodyatt, he’s done EastEnders for over 35 years without a significant break. And it’s not as if he’s not working. Good on you, sir.”

A second added: “Real talk @AdamWoodyatt deserves his extensive break… he has been working since 1985. I miss him in the soap but yeah take your rest. See in 2022.”

He might be having a break from Albert Square, but @AdamWoodyatt has been busy getting ready for his theatre tour! 🎭

In addition, a third wrote: “Adam Woodyatt clearly in no hurry back to #EastEnders then. Even his ‘sometime in 2022 at the earliest’ sounded quite non-committal #theoneshow.”

But it appears some fans couldn’t help but comment on Adam’s figure.

One pointed out: “Wow Adam Woodyatt looks well on #TheOneShow. Lost loads of weight but looks better for it.”

Another shared: “@AdamWoodyatt is looking very well. Obviously loving his break away from TV.”

How has Adam lost weight?

Adam has continued to impress soap fans with his transformation in recent years.

Meanwhile, his weight loss came after he admitted he received a cruel comment about his figure.

He told Daily Mirror Newspaper: “One of the best examples of somebody being rude is when we were at the BBC Good Food show.

“This woman looks at me and says, ‘You’re fatter than you are on telly.'”

The BBC star also previously explained his weight loss began as he trained for the London Marathon, having first competed in the race in 2017.

Adam Woodyatt BBC One EastEnders The One Show