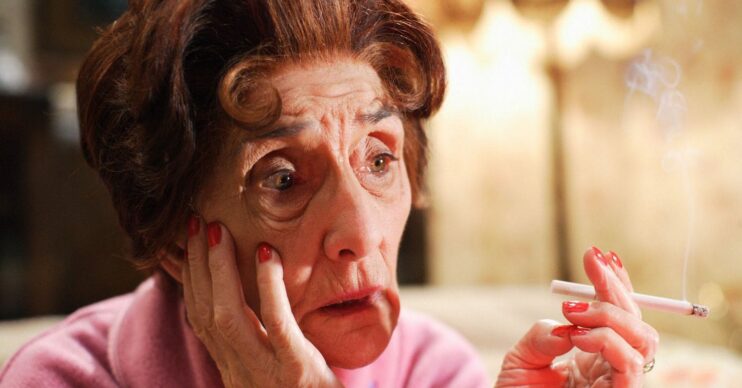 Dot Cotton voted greatest British soap character of all time: But will Dot return to EastEnders?

The chain-smoking Christian, played by actress June Brown, was last seen in Albert Square in January 2020.

Will she ever be seen in Walford again?

Who is the greatest TV character of all time?

Dot Cotton has been voted the greatest TV character of all time.

The survey of 2,000 British TV fans was commissioned by research and insights agency Perspectus Global.

The downtrodden, chain-smoking hypochondriac has had a special place in the nation’s hearts ever since she first appeared in 1985.

Why did Dot Cotton leave EastEnders?

Dot, who became Branning when she married Jim in 2002, left the Square quietly in January 2020.

In the last episode she featured in, Dot left a voicemail message for character Sonia Fowler saying she had moved to Ireland.

It was a sad departure after trusted friend Sonia had stolen from her to pay a blackmailer.

Is Dot Cotton returning to EastEnders?

Speaking on the Distinct Nostalgia podcast, she said: “I don’t want a retainer for EastEnders, I’ve left for good.

“I’ve sent Dot off to Ireland and that’s where she’ll stay. I’ve left EastEnders. […] I will never go back.”

An EastEnders spokesman said at the time: “We never discuss artists’ contracts, however as far as EastEnders are concerned the door remains open for June, as it always has if the story arises and if June wishes to take part.”

How old is actress June Brown?

She was born on February 16 1927 at Needham Market in Suffolk, England.

How long was Dot Cotton in EastEnders?

Actress June Brown’s character clocked up an impressive 35 years on the BBC soap.

With her headscarf and a cigarette in hand, Dot was a fixture in Walford since 1985, the year the show began.

What were Dot Cotton’s first words?

Dot said: “Give us a tea, Lofty. And a glass of water so I can take a Paracetamol.”

Those were the first words June Brown uttered as Dot Cotton on July 4 1985, five months after the show launched.

What were Dot Cotton’s biggest storylines?

Actress June Brown picked up numerous National TV awards as well as being nominated for a BAFTA.

In 2008, June made history by becoming the first soap character to appear alone for an entire episode.

The half-hour instalment saw Dot recording a message on tape for her husband Jim, who had suffered a stroke.

The character is also famous for her touching friendship with Ethel Skinner, who she helped overdose to end her life.

In 1990, Nick almost killed his own ma to steal her big bingo winnings, which he wanted to use to buy drugs.

In 2015, Dot watched her son die from an overdose after he confessed to multiple murders.

She told police that she’d bought the heroin and hadn’t helped him, and spent four months in jail for manslaughter.

Dot was arrested for confusing cannabis for herbal tea, and married her neighbour Jim Branning on Valentine’s Day 2002.

June married actor John Garley when she was 23.

Sadly, he suffered from depression and took his own life in 1957.

They had six children in seven years, one of whom died in infancy.

The couple were together for 45 years, until he died in 2003 of Lewy-body dementia.

Since then, she has lived alone in Surrey.

Do you miss Dot in EastEnders? Leave us a comment on our Facebook page @EntertainmentDailyFix and let us know what you think of this story.