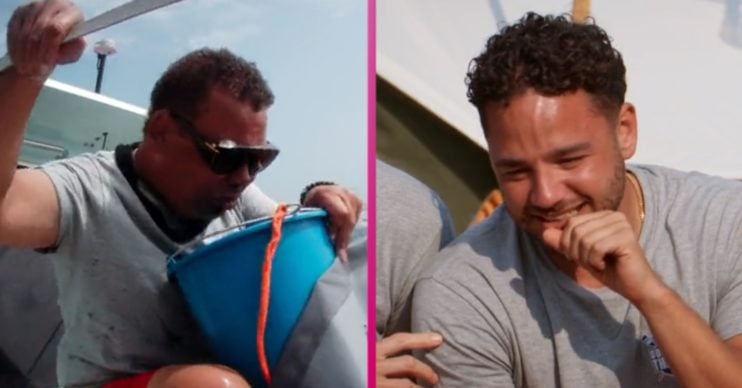 Don’t Rock The Boat: Viewers turn off over vomiting sounds

It was too much for some ITV viewers

Don’t Rock The Boat got underway last night, but some ITV viewers had to turn off because of all the horrific vomiting sounds.

During the first episode of the show, which sees two groups of six celebrities rowing the length of Great Britain, the stars had to row across a particularly choppy stretch of sea.

What happened in the first episode of Don’t Rock The Boat and who was vomiting?

Some of the 12 dealt with crippling bouts of seasickness in yesterday’s (Monday, November 2) episode, including actor and DJ Craig Charles and Kimberly Wyatt from the Pussycat Dolls.

At one point, Craig sat in his seat, oars forgotten and a bucket between his legs – before he had to take a break so he could also poo.

Kimberly, on the other hand, didn’t even have time to grab a bucket and had to do it straight over the side of the boat.

And the retching and splattering sounds left viewers at home feeling queasy, with a number of them admitting they had to turn over.

What did ITV viewers think of Don’t Rock The Boat?

One said on Twitter: “Had to turn #DontRockTheBoat over because it made our household nearly vomit!.”

Another tweeted: “Had to turn off #DontRockTheBoat as I can’t watch people spewing and splattering the whole episode. @ITV it could be good but I can’t face it.”

Had to turn Don’t Rock The Boat over because it made our household nearly vomit!

A third wrote: “I’m turning this off. There’s only so many times you can watch people vomit. #DontRockTheBoat.”

“Have I just watched Craig Charles puke and [poo] at the same time?!” asked a fourth, adding: “Who needs that on a Monday night? #DontRockTheBoat.”

Had to turn #DontRockTheBoat over because it made our household nearly vomit! 🤢🤢🤢 🌊 🌊

Have I just watched Craig Charles puke and 💩 at the same time?!?!? Who needs that on a Monday night? 🤢 #DontRockTheBoat

I'm turning this off. Theres only so many times you can watch ppl vomit. #DontRockTheBoat

Elsewhere in the first episode, The Chase‘s Shaun Wallace and former Lover Islander Jack Fincham had to grapple down a massive cliff to collect a series of buoys – while facing forward.

Shaun and Jack dropped more buoys but did the challenge much more quickly, so despite the fact that the red team won the first rowing challenge, the blues won their team a stay in a nice hotel. The reds, meanwhile, had to sleep in tents.