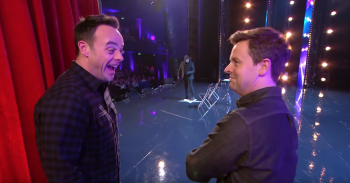 The pair were called onstage by a mysterious magician

Ant and Dec’s legendary 30 year friendship took centre stage on last night’s episode of Britain’s Got Talent as a magician showed off their special connection.

The magician – who was dressed all in black and wore a white mask – was known only as X, and refused to identify themselves in any way, saying “my identity is not important.”

As the masked magician took to the stage, Ant joked that they could end up being someone he and Dec knew, saying: “Imagine at the end they take off the mask and it’s someone we know. Like your wife.”

Dec laughed, saying: “What? Now that would be a shock.”

The magician started their act by speaking about how disconnected people feel from each other saying: “But we hope we will reconnect, and realise we are all the same. We are one.”

They then claimed they would demonstrate how connected people could truly be they said they’d need “two individuals with an undeniable bond.”

Read more: Gemma Atkinson praised for her honest take on expectations about pregnancy

But X continued, saying the connection had been established 30 years ago in 1989, before asking the pair to join them onstage.

“It is us,” Ant said in surprise as Dec looked nervously to the camera before they both ventured out to join the magician.

X then asked them to sit down on either side of them and close their eyes, telling them to pay close attention to all sensations they felt.

The magician tapped Ant on the head, before asking the pair to raise their hands if they’d felt someone touch them.

To the shock of the audience both Ant and Dec raised their hands. The magician then repeated the request, asking the pair to identify where they’d been touched and how many times.

Each time, both responded correctly, even though And was the only one who’d been touched at all.

Finally, X handed them each a pen and a small whiteboard and asked them to close their eyes and draw something.

They revealed the whiteboards to show that both presenters had drawn the exact same doodle. And when the magician flipped the boards upside down, both doodles were revealed to say “1989” – the year Ant and Dec met.

However the magician managed the trick, it’s certainly a timely one to pull with the iconic presenting duo – who reunited earlier this month after Ant’s year away from TV.

What did you think of the performance? Let us know what you think on our Facebook page @EntertainmentDailyFix