Just two weeks in to Britain's Got Talent and Simon Cowell has bashed the golden buzzer already - and for a stand-up comedian (traditionally one of his least favourite types of act).

Comic Kojo Amin, 42, is now automatically through to the live semi-finals.

This has caused quite a debate among viewers, however, with as many non-plussed by his golden buzzer achievement as those who felt it was totally deserved.

Really loved #Kojo on #BGT Golden buzzer well deserved. Anyone who makes me laugh is a winner for me. Speaking of which...can't get enough of @StephenMulhern today. #InForAPenny was hilarious. Now #BGMT 💖 x

And now for those dumbfounded by Kojo being awarded the accolade...

I didn't find Kojo that funny I don't feel he deserved the golden buzzer anyone agree? #BGT

#BGT sorry, I didnt even smile at Kojo.. i was baffled at them laughing. Good delivery, awful awful material

Kojo was put into foster care when he was just five years old.

However, the father-of-one didn't need to use this for sympathy from the judges or the audience – he insists the experience was a positive one. Ghana-born Kojo was only supposed to stay at his foster home for three months, but he got on so well with his foster mum – known fondly to him as Aunt Sandra – that he ended up residing there until he was 16.

He told the Mirror: "I don't look at being in foster care as a bad thing. I look at it as a blessing.

"I was happy with my foster mum – so much so that when the time came to go and see my [real] mum, it was a struggle for me. Not because I didn't like her, but because Aunt Sandra was everything I needed in a mother."

Kojo – who now has a son of his own, eight-month-old Roman-Kingsley, with his fiancee Tiffany – refuses to subscribe to the idea that foster children are at a disadvantage.

He added: "Although you might not have your own parents, sometimes they might not be the best thing for you anyway." 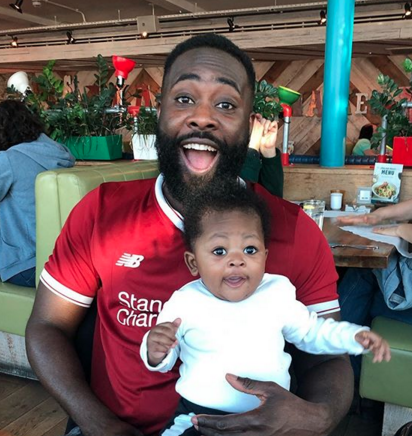 Having set up his own comedy night in a wine bar, he helped introduce US comics Kevin Hart and Dave Chapelle to audiences in the UK.

As a mark of appreciation, Hart allowed Kojo to open for him when he played a gig in front of 12,000 people at Wembley in 2014.

Kojo will now be hoping he can follow in the footsteps of Lost Voice Guy – aka Lee Ridley – who won Britain's Got Talent last year with his stand-up routine.