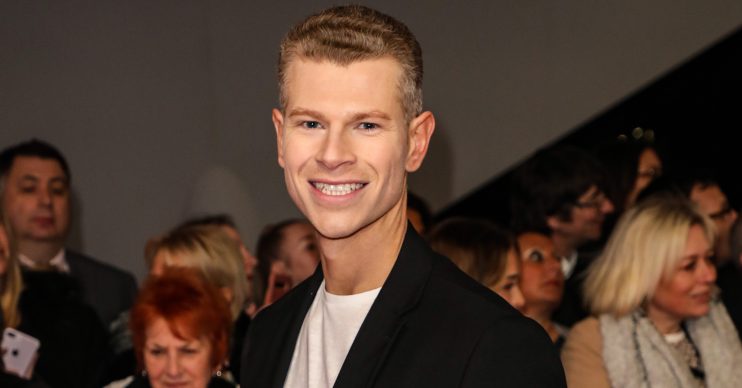 He shared the happy news on social media

Hamish Gaman, a professional on Dancing On Ice, has gotten engaged to his long-time girlfriend.

The 36-year-old skater took to Twitter over the weekend to announce he’s set to tie the knot with his partner of four years, artist Amelia – who he met on Tinder – in December.

Announcing the couple’s happy news, he tweeted alongside the cover of their interview with HELLO! magazine: “It’s finally time for some good news. We’re engaged.

It’s finally time for some good news ❤ We’re engaged 💍 And we’ve now set a date! After so much negativity, it feels so good to talk about something positive. You can read about it in @hellomag here: https://t.co/8oTmeRfK5c #DancingOnIce pic.twitter.com/b16h4ONJ1p

“And we’ve now set a date! After so much negativity, it feels so good to talk about something positive. #DancingOnIce (sic)”

The good news comes after Hamish’s alleged fallout with Caprice Bourret on the ITV show, which saw him only skate one routine on the current series.

Hamish has admitted that he decided to pop the question “sooner” than the couple had “anticipated” after his partner supported him through a difficult few months, seemingly referring to his feud with Caprice.

He told the publication: “I’ve known for a long time that I want to spend the rest of my life with Amelia, but what I’ve been through made me keen to make that commitment to her sooner than we’d anticipated.

“For the past few months I’ve been in a dark place which I couldn’t have got through without her.”

The loved-up pair plan to get married in December.

Read the full story in this week’s Hello! magazine – out now

Meanwhile, Hamish recently admitted he was reduced to tears by the controversy surrounding his split from Caprice.

The Chertsey-born star also said he was “overwhelmed” by the support he’s received from fans.

He wrote on Twitter: “Hi everyone. Thank you so much for your kind messages.

“I’ve been overwhelmed by your love and support – it’s brought me to tears at times. Honestly, I’m not okay, but I’d like to thank Amelia, my pro family and ITV for doing all they can to support me.

Read more: Dancing On Ice fans insist show is ‘fixed’ as Ben was at the bottom of the leaderboard

“I’m comforted knowing the truth always comes out in the end, and I hope we can focus on the skating again now.”

Caprice quit the skating competition a week after getting a new professional partner in Oscar Peter.