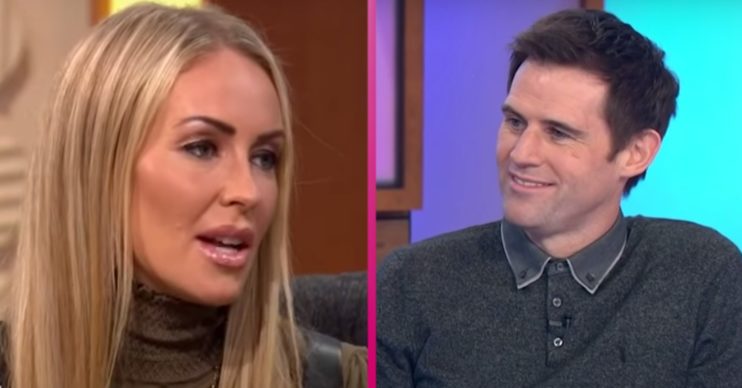 DOI pals have been offering couple their 'congratulations'

Dancing On Ice stars Brianne Delcourt and Kevin Kilbane have teased fans about getting wed.

Brianne was wearing a wedding dress in one image as she kissed her beau.

She tenderly held onto his wrists as held her face for the passionate embrace.

And Kevin was also dressed smartly for the pic in a suit and bow tie.

Another pic shared by Brianne showed two people clinking champagne flutes, as if in celebration.

We celebrated our way.

She revealed that yesterday was when the couple had been due to get hitched in Ireland.

However, their plans were ended due to the coronavirus pandemic.

Brianne explained “So, today was the day Kevin and I were supposed to be getting married in Ireland.

“Damn you Covid. So we celebrated our way.”

Kevin also noted they went ahead and marked the day they expected to tie the knot with happiness anyway.

“We celebrated our proposed wedding day anyway,” he captioned the image.

Addressing his remark to Brianne, he added: “I love you.”

It is thought the photos were taken at the Bonnie View Inn in Canada where they are believed to have been living since lockdown.

Celebrity pals and Instagram fans were quick to comment on the images – but nobody directly mentioned a wedding.

And Lisa George, another Corrie fave and DOI contestant, contributed: “Biggest congratulations to you both.”

Current DOI champion Alex Murphy also chipped in: “I love you both so much. Welcome to the family Kev!”

Several footballing stars such as Robbie Keane and Jody Craddock also offered their congratulations to the pair.

The couple met last October after being partnered up for the ITV reality series. By February of this year they were engaged after being eliminated from the show.

Sharing her happy news at the time, Brianne wrote on Instagram: “He was worth the wait. Kev, you’ve made me the happiest girl in the world. You’re my fairytale ending.”

Brianne quit DOI after a decade on the show earlier this summer.