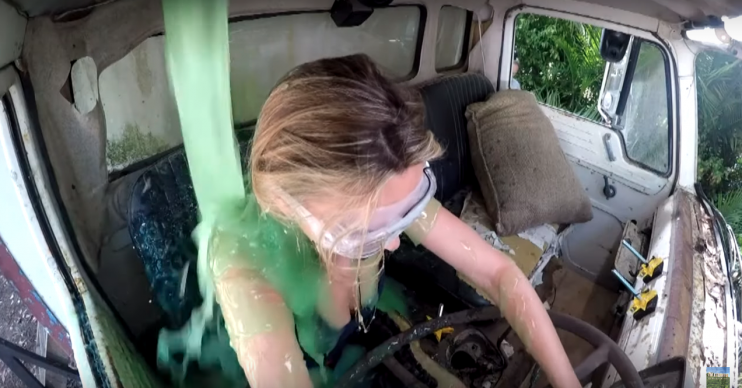 Tasked with another knot-untying challenge

Nadine Coyle is so overwhelmed during her latest Bushtucker trial she forgets what she’s supposed to be doing.

The ex Girls Aloud star looks to be tasked with another knot-untying challenge in the I’m A Celebrity trial, due to air on TV tonight.

The amount of green ooze being tipped on her from above clearly takes her by surprise as she attempts to win a star to provide a meal for the camp.

“Wow, this is quite the slime,” Nadine says.

Read more: I’m A Celebrity viewers demand to know why Kate Garraway was in the bottom two

“I’m going to need a shower after this.”

But she appears to become confused as she’s doused with slime again and again – and has to ask presenters Ant and Dec for a reminder about her instructions.

“I can’t remember what I’m supposed to do,” Nadine admits after struggling to free a star tied to the steering wheel in the repurposed vehicle she is sitting in.

And in an odd moment, Nadine offers up some banter about fellow campmate Ian Wright’s recent knotty experience in which he claimed he hurt his hands.

“Ian said he had really sore fingers last night,” she says as she tries to hurry along her progress.

Nadine concerned Ant and Dec in a previous trial when she wailed in panic.

She lined up alongside Roman Kemp, Jacqueline Jossa and Ian for the Sinister Circus to try to escape from tanks that contained snakes and crabs as they filled up with water.