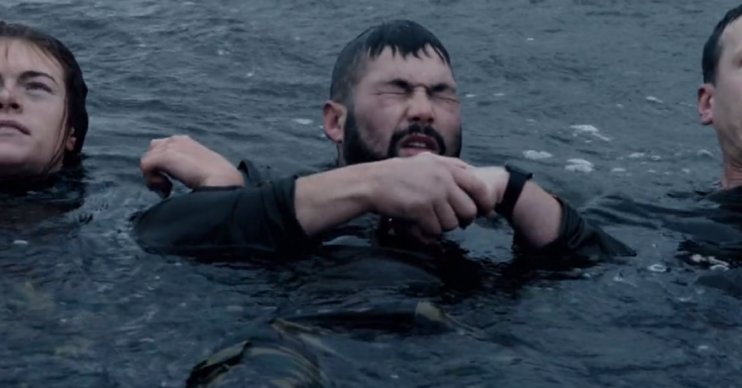 How many times did they film it?

Channel 4 viewers appear to have spotted what looks like an editing blunder in Celebrity SAS: Who Dares Wins.

During last night’s (Monday, May 11) episode, the contestants had to take part in a tough sea challenge that saw them linking arms in the freezing water while the waves crashed over their heads.

It was brutal to watch, but some viewers at home were certain they had spotted evidence the scene had been heavily edited and filmed multiple times.

On Twitter, fans of the show couldn’t help noticing that some of the celebrities seemed to have switched places at several points throughout the horrific endurance test.

Must have been awful doing it twice…

Another wrote: “So that walk into the water took three or four takes? Brendan, Lauren and the boxer bloke swapped around about five times. Fake. #CelebritySAS.”

ED! contacted Channel 4 for comment and a spokesperson for the broadcaster said: “The ‘surf immersion’ task tests the mental resilience of the recruits in a volatile sea. All the recruits completed the specific task within the time limit as required.

“With hours of footage cut down to six one-hour episodes, all tasks in Celebrity SAS: Who Dares Wins have to be condensed to fit the time.”

It follows an emotional episode last week that saw reality star Joey Essex open up about the impact of his mother’s tragic suicide.

Channel 4 viewers were reduced to tears hearing the former TOWIE favourite speak about losing his mum when he was just 10 years old.

He said on the programme: “I just started, I know it’s stupid, being able to talk about it openly and saying the word ‘mum’ probably, like, three or four years ago.

“I always ask myself why. Why she would do that? Because I know my mum loved me.

“I didn’t understand,” Joey added afterwards. “I remember saying ‘she can’t be gone, she’ll come back because why would she leave me?”