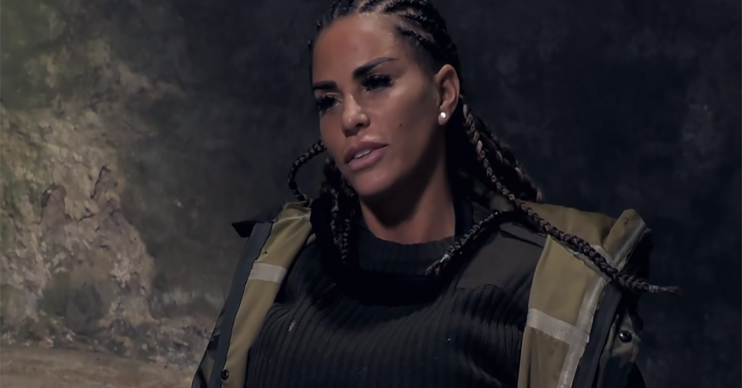 She has had a tough time on the show so far

She blamed her boobs as the reason why she struggled with the hardcore training exercises.

However, the star claims the show left her with ‘new life goals’ and says she’ll ‘never take creature comforts for granted again’.

Hardman instructor Ant Middleton piled the pressure on the model and reality TV star from the very beginning of the episode, appearing determined to break her.

But Katie says her ‘inflamed’ boobs were the reason she quit the Channel 4 show – not because she found it too tough.

Katie had to hold a rock over her head for ten minutes but started to struggle.

Why did she quit?

She struggled to hold the bag above her head before snapping that she’d had enough and quit the show.

I had to leave because of the pain I was in.

“I pulled something in training,” she told The Sun.

After a great effort getting through the initial phase of the course, @KatiePrice becomes the first recruit to VW.#CelebSAS#SASWhoDaresWins@antmiddleton pic.twitter.com/8tyvJoZwpo

“My breast reduction became inflamed. It was out of my control. I was gutted. I had to leave because of the pain I was in.

“I’ll never take my creature comforts for grant­ed again. I left with new life goals. I left the old Katie up there. She’s not coming back.”

During last week’s episode, viewers saw Katie yelled at by Ant for not filling her water bottle up properly as well as being told to ‘shut the [expletive] up’ when she coughed.

Meanwhile, Katie screamed as she embarked on a 50 metre free fall from an overhanging cliff face during the first episode (April 20).

Speaking to Ant during the show, Katie explained that she had already overcome tough times.

“I’m not here for sympathy, I’m just saying, I have been through a lot of [expletive] and I’m still going through it,” she said.

“I don’t even know where to start. My fifth kidnap threat happened two weeks ago. Then my mum being told she was terminally ill last year.

“My horse escaped on my front road and died in my hands.

“Then held at gunpoint in South Africa with my kids.

“That’s the first time I’ve ever had a proper gun to my head thinking we’re going to die. [Expletive] horrific.”