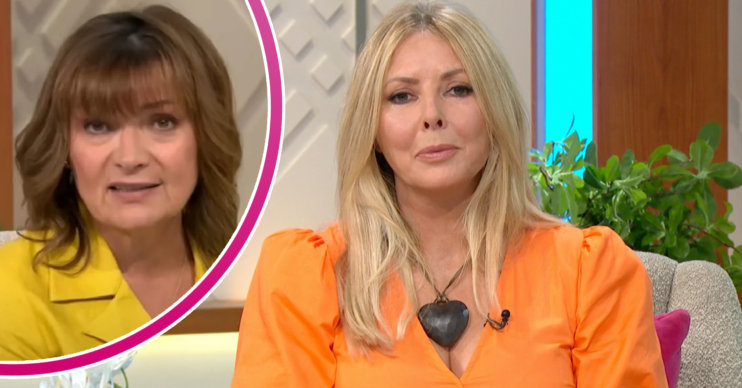 ‘Unbearable’ Carol Vorderman divides Lorraine viewers as they ‘switch off’

The Countdown legend is covering for Lorraine Kelly this week

Carol Vorderman has taken over from poorly Lorraine Kelly on her show this week and fans are not exactly loving the change.

Earlier this week, Lorraine revealed that she’d tested positive for COVID-19 so would be unable to present her morning TV show.

ITV drafted in Carol Vorderman to cover, but the star’s presenting skills have left some viewers “switching off”.

Carol Vorderman takes over on Lorraine

Former Countdown star Carol was announced by Lorraine as her replacement earlier this week.

Professional, warm, personable, glam. She should be doing more high-profile gigs these days.

She said: “Well the Covid has finally got me and I tested positive at the weekend.”

Lorraine said it wasn’t “too bad” thanks to the vaccine and that Carol would be holding the fort until she was well enough to return to work.

Earlier today, some fans of the Scottish TV presenter took to Twitter to reveal they hope Lorraine’s return comes sooner rather than later.

“Had to switch channels,” declared one, before adding: “That horrendous laugh of Carol Vorderman was too much to bear. It’s so fake.”

“Lasted 4 minutes of #lorraine this morning,” said a second, before pleading: “Get well soon Lorraine.”

“Lorraine is even more unbearable now that Carol is presenting it,” said another.

“Yes it is, I’d prefer Ranvir Singh,” another replied.

However, others preferred Carol and said she should stick around permanently.

“Keep Carol and get rid of Lorraine,” said one armchair critic.

Read more: Lorraine Kelly shows off weight loss on Instagram as she stuns in ‘bargain’ dress at Wimbledon

“@carolvorders is really good presenting @lorraine,” said another. “Professional, warm, personable, glam. She should be doing more high-profile gigs these days,” they added.

“Carol bringing even more sunshine to us on Lorraine,” another declared.

“Get well soon @reallorraine – Carol is doing a fine job keeping your seat warm,” said another.