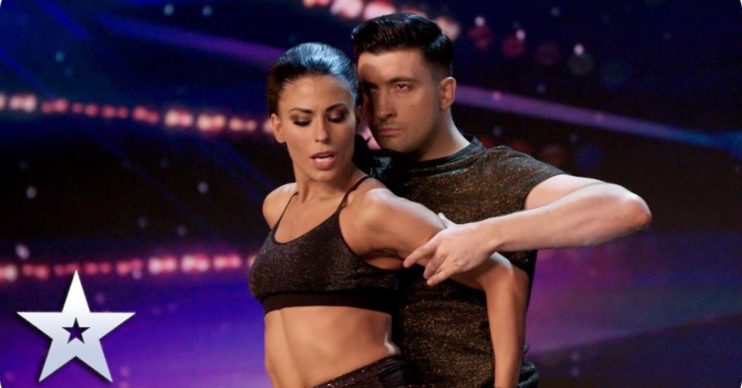 The BGT stars are no strangers to the spotlight

Prepare to be wowed by Aaron Brown and Jasmine Takacs on Britain’s Got Talent tonight (May 9).

But if BGT stars Aaron and Jasmine look familiar, there’s a good reason why.

Aaron, 28, and Jasmine, 32, both have impressive careers in the spotlight.

In fact, they’ve both worked on the BBC series Strictly Come Dancing.

“It has been a privilege working with Jason and to see his creative process creating the professional group numbers and various themed weeks for the upcoming season,” Aaron said.

He has also worked with the show’s professional dancers to help assist with their choreography for the celebrity routines.

Meanwhile, Jasmine has been part of the Strictly team since 2013.

She works on the show as a professional dancer extra and also assists with the pro dance group routines.

Have Aaron and Jasmine worked on other shows?

Aaron and Jasmine are both professional dancers on Sweden’s Strictly spin-off Let’s Dance.

Jasmine has also worked on the American version of Strictly Dancing With The Stars.

But it’s not all about reality dance competitions.

"I See Dance Being Used As Communication Between Body And Soul, To Express What Is Too Deep To Find For Words"

Posted by Jasmine Takacs and Aaron Brown on Friday, April 10, 2020

In addition, he’s teamed up with former Strictly pro Pasha Kovalev on his UK tour Let’s Dance The Night Away as well as Kristina Rihanoff. on her tour Dance To The Music.

Jasmine on the other hand has worked with the likes of Katy Perry, Justin Bieber, Taylor Swift and Rhianna on their tours

Avengers fans may also recognise Aaron from Age Of Ultron as he appeared in the Hollywood blockbuster in 2014 too.

How did Aaron and Jasmine meet?

Reliving the moment, he said:  “Immediately was taken back by her amazing dancing.”

He contacted her after the show and the duo started working together soon afterwards.

Opening up about their dance style, Aaron said: “We have inspiration from some dancers – but they just do salsa or traditional ballroom.

“We like to do a fusion of everything and we also have musical theatre and jazz training.”

On BGT, Simon asked the pair what their professional dreams were.

An excited Jasmine told him: “On big tours around the UK and the world – the Aaron and Jasmine show!”

However, the pair are no strangers to touring.

Recently, Jasmine toured Sweden with her own show called Dance The Night Away which received standing ovations after every show.

Catch up on previous episodes via the ITV Hub.