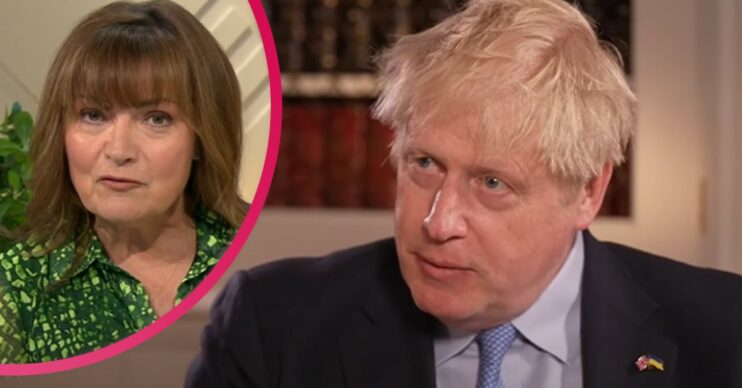 Boris Johnson made a massive clanger on GMB today.

The Prime Minister was on the show for the first time in five years and Susanna Reid had a lot to ask him about.

Partygate and Covid-19 were both brought up but it was Mr Johnson’s Lorraine Kelly snub which really got fans’ goat.

Susanna gave as good as she got as she tackled the concerns the nation is talking about.

Mr Johnson answered as many expected, but it was when the interview was wrapping up that things got really awkward.

As Susanna signed off she said: “Prime Minister it’s good to talk to you. Lorraine is waiting to take up all the issues that you have brought up in this interview.”

Boris should have smiled and said nothing, but instead he quipped: “Who’s Lorraine?”

Twitter went crazy with people opining on the interview with loads of comments about Lorraine.

One wrote: “The fact that he ended it with ‘Who’s Lorraine?’ Just shows how out of touch he is.”

Another said: “The most damming part of the #GMB interview with #susannareid and #BorisJohnson is at the very end when Boris asks ‘who’s Lorraine?’”

Meanwhile, a third mused: “I mean we can all laugh about the ‘who’s Lorraine’ comment but that’s the reality of Boris Johnson, when he should keep his mouth shut, he can’t. He is a liability.”

‘Partygate’ is one of the topics viewers insisted Susanna grill the Prime Minister on.

Many Brits were incensed when it was revealed the government had been enjoying lockdown parties while the rest of us stayed in.

Referring to the seeming double standard, Susanna asked: “Why did people who made the laws that the rest of us stuck to scrupulously not keep to them?”

Boris “apologised for the things that we got wrong”.

But he was unable to offer further explanation.

Referring to Sue Gray’s report, he said: “With great respect I’m going to have to ask you to wait until the end of the investigation.”

Many fans branded the interview a “car crash”.