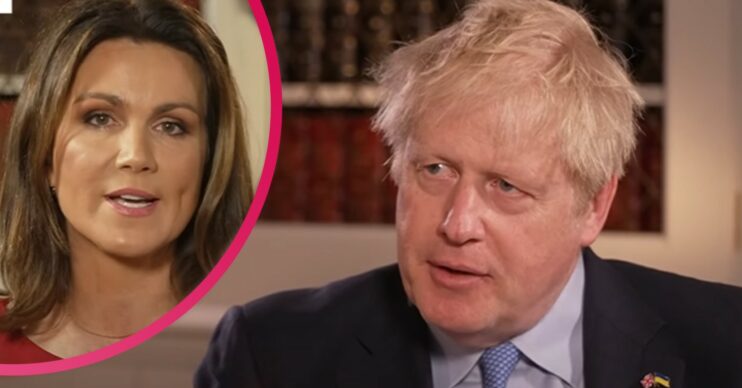 The Prime Minister hasn't been on the show in five years

Boris Johnson appeared on GMB today as he was interviewed by Susanna Reid for the first time in years.

The Prime Minister has not been on Good Morning Britain for five years.

During the interview, Susanna grilled the Prime Minister on the government’s handling of the Covid-19 pandemic as well as the cost of living crisis.

She also asked Mr Johnson how he has remained in his position when others who broke Covid guidance, have resigned.

Susanna also grilled the PM on the Ukraine war and how the UK has handled the refugee crisis.

During one part of the interview, Susanna asked Mr Johnson: “Are you honest, Prime Minister?”

Mr Johnson replied: “Yes, and I think the best way to judge that is to look at what this government says it’s going to do and what it does.”

Viewers watching were divided over the interview, with many complaining about Mr Johnson’s behaviour while speaking to Susanna.

Some accused him of trying to ‘put her off’.

One viewer said on Twitter: “Boris ‘manspreading’ to put Susanna off.”

Another wrote: “@BorisJohnson clearly doing his best to put @susannareid100 off her line of questioning on @GMB with some egregious #manspreading.”

A third added: “The way Boris is grossly staring out @susannareid100 is disgusting.

“Hats off to her completely holding her nerves of steel.”

One tweeted: “Fair play to Susanna Reid, I was impressed with her interview today on #GMB.

“She nailed Boris Johnson despite him as usual trying to avoid answering questions.”

Another added: “Great to see Susanna Reid absolutely wipe the floor with Boris this morning!”

Good Morning Britain is on weekdays at 6am on ITV and the ITV Hub.