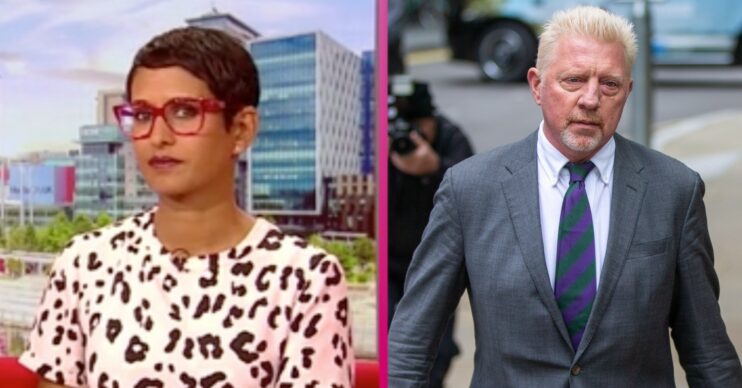 BBC presenter Naga Munchetty had an embarrassing slip up on air as she confused Prime Minister Boris Johnson and tennis star Boris Becker.

The unfortunate mix up comes as the former Wimbledon winner has been jailed for bankruptcy.

What was Naga Munchetty’s slip up?

The unfortunate slip up happened during BBC Breakfast on Saturday morning as the news was discussed.

“He was sentenced for two-and-a-half years for hiding assets to avoid paying debts.”

Naga’s co-host Ben Thompson then handed over to another presenter as they tried to smooth over the blunder. However, viewers were quick to spot the mistake.

On Twitter, one viewer said: “What a slip! BBC’s @TVNaga01 claims Boris Johnson just spent his first night in prison.”

Another added: “Was that a Freudian slip from Naga Munchetty? ‘Boris Johnson spending his night in prison’.”

“Not helped when Naga on BBC breakfast actually said Boris Johnson rather than Becker had been jailed with no correction,” said a third.

Elsewhere, Naga has been keeping viewers up to date on her health.

The host took to her social media channels to document her journey back to “fitness”.

Fans of the breakfast telly star will know that Naga had been suffering from a number of injuries that she sustained while running. A self confessed running lover, the star has been slowly getting “back on the road to fitness”.

Speaking to another BBC TV presenter Gethin Jones in 2021, Naga revealed her injuries: “I love running! But I’ve got Achilles tendinitis and I’ve dislocated my knee.”

Earlier in April, Naga showed off her love of fitness as she headed back out on a run.

Speaking on social media, the presenter said: “It’s been a while since I’ve been able to run 5k non-stop. Injuries take time to recover from.”

The host then admitted: “Patience isn’t a virtue of mine.”