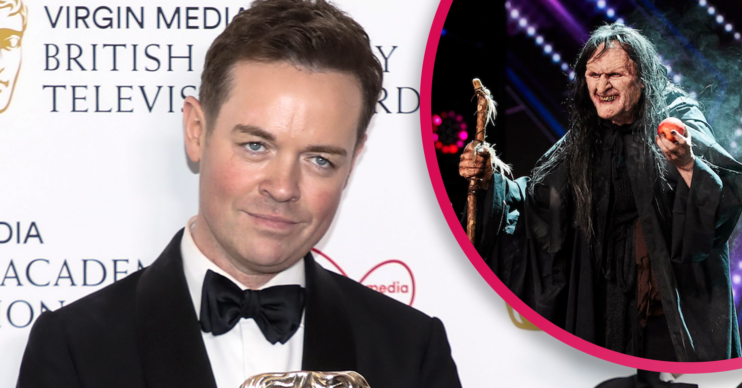 BGT 2022: Stephen Mulhern drops huge clue he IS behind The Witch

BGT 2022 star The Witch has left everyone scratching their heads wondering who could be behind that super-scary on-stage persona.

Is it Leigh Francis, returning semi-finalist Marc Spellman or could it be Stephen Mulhern.

Stephen’s latest Instagram post has certainly put the cat amongst the pigeons when it comes to The Witch’s identity.

So who is behind the mask? Let’s see what Stephen had to say…

He scared the living daylights out of the Britain’s Got Talent judging panel during his first appearance.

And, after their heart rates had returned to normal, BGT fans took to Twitter to comment on who they thought it was.

One name came up again and again… that of Stephen Mulhern.

“I was thinking Stephen Mulhern in disguise,” said one.

Now the man himself has broken his silence.

Is Stephen Mulhern The Witch on BGT?

He shared two pictures of himself in the make-up chair and one of The Witch on the BGT 2022 stage.

Alluding to the fact that he looks like The Witch before he puts his make-up on, Stephen set tongues wagging among his followers.

“Everyone keeps asking if I’m the Witch from @bgt!” he said.

“Well you might want to ask @lisaarmstrongmakeup what I look like before she put make-up on me!” he said, joking about Lisa Armstrong, who works with Stephen.

One commented: “I have a feeling that this is a bloody plot twist! Let’s just see soon!”

“I knew it was you!” said another.

That’s why you don’t do you thing on ITV2 any more!

“That’s why you don’t do you thing on ITV2 any more!” said a third, referring to Britain’s Got More Talent, which has been axed.

“No…it can’t be! Can it…? Well, stranger things have happened!” said another.

So who do you think is behind The Witch? Tell us on our Facebook page @EntertainmentDailyFix.