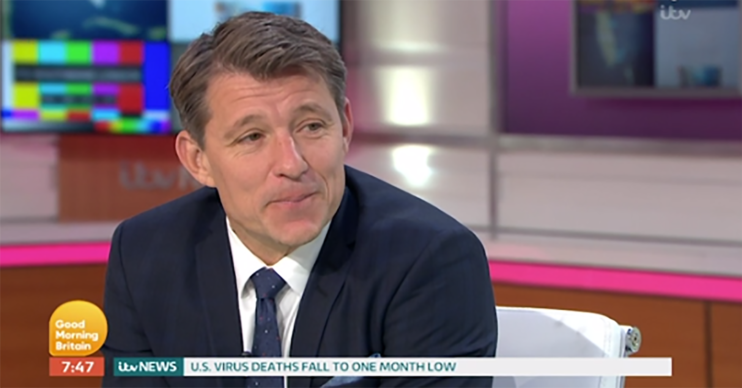 He recently filmed for Celebrity Juice from his home

The Good Morning Britain presenter recently shared a photo as he filmed for the ITV2 comedy panel show via video call from his home.

The picture showed Ben filming alongside Mel B, Holly Willoughby, host Keith Lemon and other guests all from their homes.

He said: “People have been getting in touch saying, ‘How on earth can you record Celebrity Juice with the social distancing?’

“There you go, that’s a picture of my Instagram. That’s me looking at the camera.

“What they did was, they sent us an extraordinary set up whereby I could see Keith, I could see Matt Goss was there, Holly was there.

“Mel [B] was there, Laura Whitmore, Emily Atack..

“All of us together, but we’re all in our homes around the country, in fact Matt was in Vegas, as well. So we did it socially distancing.”

His co-star Susanna Reid asked if separate locations meant he didn’t have to do any pranks.

So we did it socially distancing.

Ben replied: “Oh no, there was lots of physical stunts and pranks!

“If you’ve ever wanted to see Matt Goss play his guitar naked, then tune in to Celebrity Juice…”

Susanna quipped: “When is it? Just asking for a friend!”

Ben added: “Thursday at 10. It was an extraordinary experience. Hilarious, ridiculous and terrifying at the same time.

“But we did it very safely. It was an amazing set-up, to be honest.

“To watch how they did it and it will be interesting to watch the edit when it comes together. It took a long old time to get done!”

Ben recently told fans on Instagram about his “bonkers” and “bewildering” experience on the show.

Fans excited about his appearance

One person commented: “Cant wait for this!”

Another wrote: “Can’t wait for this! It doesn’t get much better than @mattgoss being naked.”

A third added: “Cannot wait to see this next week!”