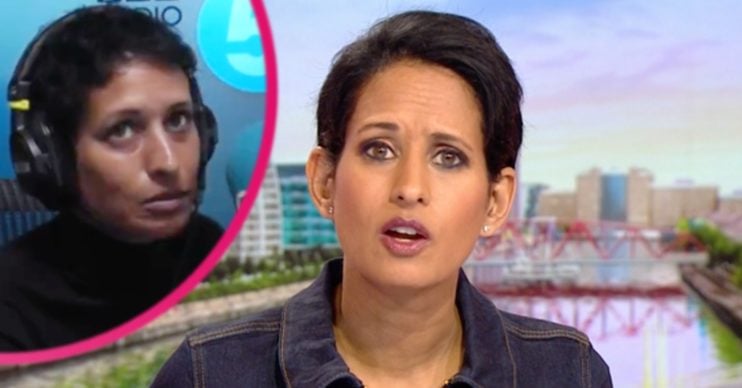 The presenter was touched by the story

The 46-year-old presenter, who also appears on the Radio 5 Live show, shared the story after hearing about the loss of colleague Kate’s family member.

Naga touched upon the subject as she discussed the recent death of Prince Philip.

What did Naga Munchetty say?

“This is after those very touching tributes to the Duke of Edinburgh made by Prince William and Prince Harry yesterday.”

Naga went on to speak about Kate, who is part of the show’s production team.

Furthermore, she added: “Kate sent me this note today saying she never had the chance to know either of her grandads. But her great-uncle Jim filled that role in her life.

“What Kate says is, ‘He and I shared a love of reading. For my 11th birthday, he gave me this book he’d read about in the paper and he thought it sounded good.

“‘It was the first Harry Potter.

“‘That book got passed around my siblings and all my cousins until it’s not got much monetary value anymore because of its condition. I’ll always cherish it as a piece of my Uncle Jim’.”

Naga explained it was also Jim’s funeral on Friday (April 15).

She concluded: “It just shows it doesn’t have to be grandads. It can be anyone who can help shape your lives and touch them.”

However, some viewers claimed she was “rude” during the chat.

One complained: “Naga Munchetty has just spent the whole of her interview with Grant Shapps interrupting him. It is so rude and off putting for the viewers. We can’t get the jist of what he is trying to tell us. Pointless interview.”

Furthermore, others believed Naga was simply challenging the MP.

Praising the host, another said: “Glad she’s holding our corrupt politicians to account.”