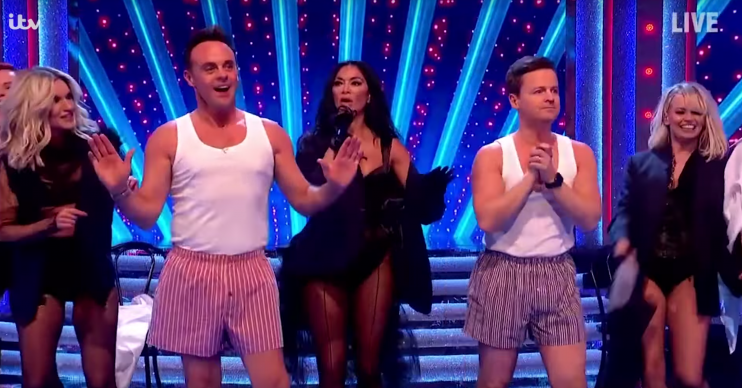 Raunchy costumes reported to have resulted in 419 complaints

Ashley Roberts has stood up for “owning femininity” after complaints were made to a TV watchdog about a ‘raunchy’ recent performance.

The Pussycat Dolls star is said to have defended skimpy costumes worn by the group on Saturday Night Takeaway, claiming they were “fierce”.

According to reports, 419 complaints to Ofcom were sparked by the performance on the weekend evening light entertainment show last month.

And The Sun Online reckons Ashley, 38, has countered the objections by highlighting how their risqué look was a ‘celebration of women’.

The tabloid news outlet quotes her as saying: “We are wearing costumes. And they are sassy and fierce.

“We are owning our femininity and celebrating ourselves as women.”

We are owning our femininity and celebrating ourselves as women.

The routine also saw hosts Ant McPartlin and Dec Donnelly get involved as they stripped to their vests and boxers.

The presenting duo also joked about the Dolls ‘toning down’ for the “family friendly” show after the band sparked hundreds of complaints for their routine on X Factor: Celebrity at the end of 2019.

Despite the larking about, some viewers were clearly outraged by what they saw on their televisions.

One person wrote: “OMG disgraceful this is a family show!! And desperate old dolls running round like horses your show was turned off tonight… was looking forward to it.”

A third added: “Another inappropriate performance from Nicole and her backing singers!!”

However, the hosts still poked fun at the grumbling during last Saturday’s installment of the ITV show.

A skit with Gavin and Stacey star Rob Brydon – who was the guest announcer – saw them mock the complaints as he hinted he wanted to strut around on the stage in his own saucy get up.

He deadpanned: “If you think I’m going to dress in a leather corset and PVC boots and perform three minutes of highly explicit dancing, you’d be absolutely right.

“All I’m saying is, if the script calls for it and people wish their girlfriend was hot like me, I’ll do it.”