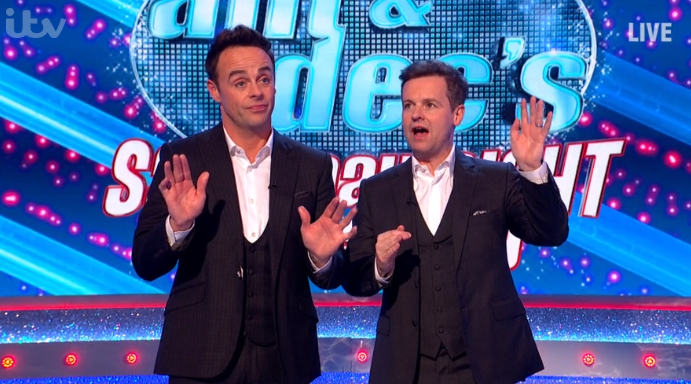 68 people complained to Ofcom about the Pussycat Dolls’ racy performance during the launch show, which saw Ant and Dec take part as they hilariously began stripping to their vests and boxers.

During Saturday night’s programme, the pair mocked the complaints with Gavin and Stacey star Rob Brydon, who was the guest announcer.

Rob told the hosts: “I do have one request. I saw the Pussycat Dolls on last week’s show.

All I’m saying is, if the script calls for it and people wish their girlfriend was hot like me, I’ll do it.

Dec interrupted: “Rob, we wouldn’t dream of asking you to..”

Rob said: “Let me finish, Dec. If you think I’m going to dress in a leather corset and PVC boots and perform three minutes of highly explicit dancing, you’d be absolutely right.

“All I’m saying is, if the script calls for it and people wish their girlfriend was hot like me, I’ll do it.”

It comes after viewers were unimpressed with the band’s performance on last Saturday’s show.

During the funny skit, Ant and Dec jokingly asked the singers to “tone down” their raunchy performance for their “family friendly” show after the band sparked hundreds of complaints for their routine on X Factor: Celebrity at the end of last year.

However, one viewer wrote on Twitter : “OMG disgraceful this is a family show!! And desperate old dolls running round like horses your show was turned off tonight… was looking forward to it.”

A third added: “Another inappropriate performance from Nicole and her backing singers!!”

But others loved the band’s performance.

Another gushed: “Ant and Dec trying to censor the @pussycatdolls , certainly enjoyed that. It was a great way to end tonight’s episode with them. Loved their performance.”