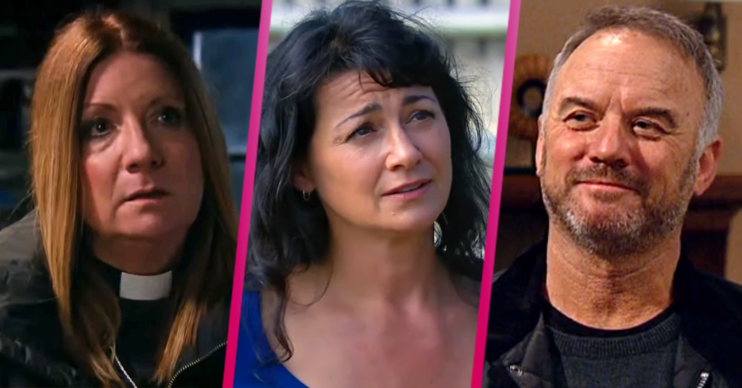 Who runs over Moira in Emmerdale? Meet the suspects

In next week’s Emmerdale, Moira ends up being involved in a hit and run.

But was it an accident or is someone out to get her?

And who runs over Moira in Emmerdale?

Who runs over Moira in Emmerdale?

Emmerdale fans are about to find out the truth.

In upcoming scenes, Harriet prays to God for forgiveness over her affair with DI Malone.

Harriet meets the corrupt copper at the church and despite her protests, it looks like they’re about to kiss again. But suddenly they’re interrupted by Moira.

Unable to lie, Harriet comes clean to Moira about her affair with Malone, leaving her stunned. But that isn’t the only thing Harriet tells her.

The farmer is astounded when Harriet also reveals Cain’s involvement with Malone’s dodgy dealings at the garage.

Meanwhile, Will confronts Cain and tells him Malone is back on the scene. Cain finds the dodgy detective and warns him to keep away from the village.

However when Malone tells Cain he has a new interest in the village, the mechanic immediately assumes it’s Moira.

Later Malone pays Moira a visit and warns her to keep quiet about his and Harriet’s affair.

But as Malone leaves, Cain is discreetly watching from afar. As he watches his nemesis leave, he’s convinced Malone and Moira are seeing each other.

However things take a turn when Cain later gets a call to say Moira has been involved in a hit and run.

But who is responsible? Was it an accident?

As Malone was the one making threats to Moira, it looks like he could be the prime suspect.

We know Malone was responsible for killing Moira’s prize bull and beating up Will. Will he go as far to try and kill someone?

The vicar is engaged to Will Taylor and has a lot to lose if her affair with the corrupt copper comes out.

Will Harriet go to extreme lengths to keep the affair quiet?

While it’s unlikely Cain is the driver (as he receives the phone call to say she’s been run over) he still can’t be erased from our suspect list.

Surely he wouldn’t run Moira over on purpose, but could he have been after someone else?

The wedding planner will return to the village this week. But at the end of the week, she leaves her daughter Millie with Jamie before fleeing once again.

Viewers know Andrea is going through a tough time after her husband Jamie’s affair was exposed.

Could she end up running over Moira in a distressed state?

Nate and Rhona are currently doing a secret business deal behind Moira’s back.

Their reason for not telling Moira is because she would refuse to work with Nate.