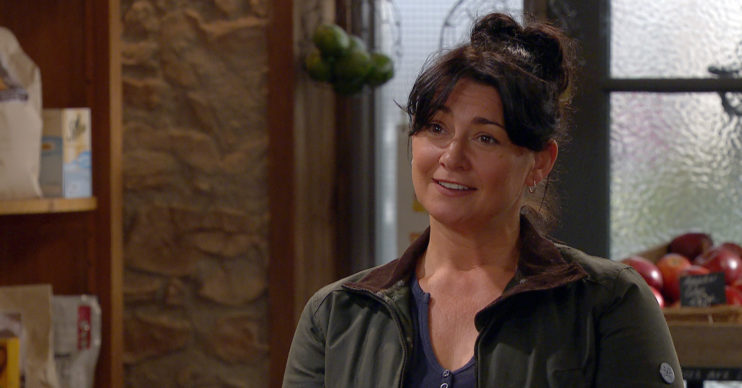 She's the victim of a hit and run next week

This Morning soap expert Sharon Marshall has hinted Moira Dingle will die when she’s involved in a hit and run in Emmerdale next week.

Speaking to Holly Willoughby and Phillip Schofield today about all the soap gossip, talk turned to Moira’s accident.

The farmer will become embroiled in the Harriet and DI Malone affair next week.

What happens to Moira next week?

Harriet is feeling exceptionally guilty over her affair with the dodgy officer, but after praying to God for forgiveness, she then can’t resist temptation when Malone turns up again.

Just as the illicit lovers are about to kiss, Moira interrupts them. Harriet can’t bring herself to lie, though, and confesses the affair right there and then.

Malone isn’t happy his dirty secrets are spreading so later pays Moira a visit and threatens her to keep quiet.

But Cain has got wind of Malone’s return and after confronting him, mistakenly believes it’s Moira Malone is having an affair with!

As Cain listens in to their conversation, it convinces him he’s definitely right and he’s fuming.

Later in the week, Cain gets a phone call and hears the horrific news Moira has been the victim of a hit and run.

What did Sharon Marshall say about Emmerdale on This Morning?

While we don’t know exactly what her fate will be Sharon gave a huge hint the outcome might not be a happy one.

She told Holly and Phil: “Will Moira survive? There is a death coming up, but I can’t tell you who…”

Does that mean Moira’s a goner?

Emmerdale does a socially distanced murder

We already knew there is set to be a socially distanced murder in the Dales.

John Whiston, who is the Managing Director of Continuing Drama and Head of ITV in the North, appeared on Sky News on Tuesday, June 9 to discuss returning to filming, and let slip there is going to be a murder in the Dales “quite soon”.