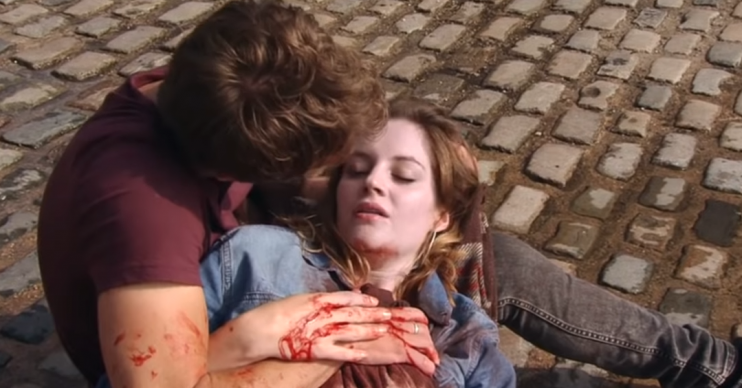 Paula Lane has shared a message on the third anniversary of Kylie Platt’s murder in Coronation Street.

Paula, who played Kylie from 2010 to 2016, posted a picture of her alter-ego’s final scene on Twitter.

3 Years since my exit aired! Time goes so fast pic.twitter.com/O2EJkcX2jd

The actress captioned the post: “3 years since my exit aired! Time goes so fast.”

A second put: “Such beautiful acting for both of you! Pinky promise had me.”

Another replied: “I can remember watching this. Feels like 5 mins ago. #Corrie.”

In 2016, Kylie had persuaded her husband David to move to Barbados with their two children Max and Lily.

The four of them would go and live with Kylie’s sister Becky, who left Weatherfield in 2012.

David and Kylie planned on celebrating the news but as Kylie was on the phone to her husband she noticed some commotion in the kebab shop.

She got off the phone and went over to see what was happening and noticed her friend Gemma was being harassed by Clayton Hibbs.

Clayton pushed Gemma onto the ground and knocked her unconscious and Kylie ran after him but ended up being stabbed.

Kylie later died in David’s arms on the cobbles as they waited for the ambulance.

Since her departure, Paula has gone on to play Lauren in the UK tour of Kinky Boots.

The pair became close but Shona was actually Clayton’s mother.

She later admitted who she was to David and he ordered her to leave the street, wanting nothing to do with her.

Shona and David were later brought back together when she realised David’s niece Bethany was being groomed by Nathan Curtis.

Since being together, the pair have had to overcome many obstacles.

Earlier this year, Clayton escaped from prison and took Shona hostage threatening to kill her if he didn’t get what he wanted.

As he went for her with a knife, Shona stabbed him and he was rushed to hospital, where he was kept until he was taken back to prison.

Eventually Shona, now engaged to David, told her son she wouldn’t be visiting him again.