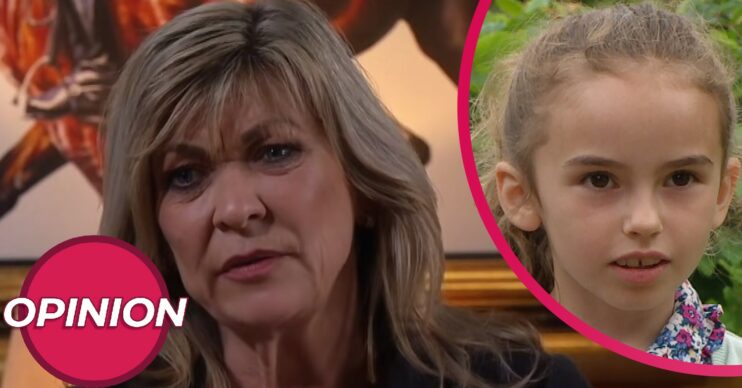 Kim would never give up on wanting to see Millie

Emmerdale aired the return of Kim Tate this week as she waltzed back into Home Farm and put Bernice right back in her place.

It’s good to have her back on her throne, even if she does seem to have gone a bit soft.

However, it seems to me like they have missed one major plot point in her return: she would never give up on granddaughter Millie.

Kim would never have given up custody of Millie in Emmerdale

In fact, Kim would never have given Millie up so easily in the first place.

Prior to Andrea’s tragic death Kim was already fighting her for custody of the little girl, so to just allow Hazel to take her away when the chance to keep her for good was being handed to her on a plate is VERY unlike Kim Tate.

She might have been broken by all the death, and she may have been swayed by Millie’s desire to go and live with Granny Hazel, but the Kim Tate we know and love wouldn’t have let the little girl go without a fight. And she certainly wouldn’t cut off all contact with her.

But she did and it looks like she has, all it took was Andrea’s mum to say she was taking Millie and Kim gave in.

And now she’s returned it’s like she’s accepted Millie’s out of her life for good. I can’t connect that with Kim as a character.

Tonight (Friday, December 10) there was mention of Millie when Kim was talking to Lydia.

Lydia told her: “I know losing Millie hit you hard,” and Kim agreed. So why, if she was hit so hard, is she not doing everything within her power to see her regularly?

Lydia also made a very good point when she told her boss: “You always get what you want.”

Yes, she does. And we know she wanted Millie.

This is the woman who watched her husband die, ordered hits on family members, was in prison for years, has faked her own death – twice – and has every henchman and PI in the Yorkshire area at her beck and call. Kim Tate would eat Granny Hazel for breakfast.

Is it love with Will? Has he made her go soft? No man before him has managed it to quite this extent, so what’s changed now? I can’t buy into it at all.

Will Millie and Jamie return to Emmerdale?

When it was revealed Jamie was not dead Emmerdale announced there were no plans for him to return to the show.

Kim firmly believes her son is dead and thinks her granddaughter is living with Hazel.

If Jamie and Millie do not return to Emmerdale, which it looks like they’re not doing, there is no way Kim would just give up.

How will Emmerdale explain this one?

Over Christmas we know Kim will begin missing Millie as she feels a pang of loneliness when she looks at pictures of her and Jamie.

It’s clear she’s missing having her family around her, but why is she not looking for them?

Surely she’ll have sent presents to Millie for the first Christmas without her mum? Kim would absolutely not let that go without spoiling her and making a fuss.

And if she has an address to send presents to, could she not just turn up there and demand to see her granddaughter?

It all just seems a bit convenient, doesn’t it? Kim mentions Millie every now and then, but it’s largely forgotten about.

Will Emmerdale address it? Will we get an explanation?

It’s feasible there’ll be a line in a couple of weeks about Hazel having disappeared with Millie, but then we’d need to understand why Kim wouldn’t hire every lawyer in the land, plus all the private investigators on her books to find them.

Emmerdale had better have an explanation planned for all this because it’s totally out of character and we need answers.