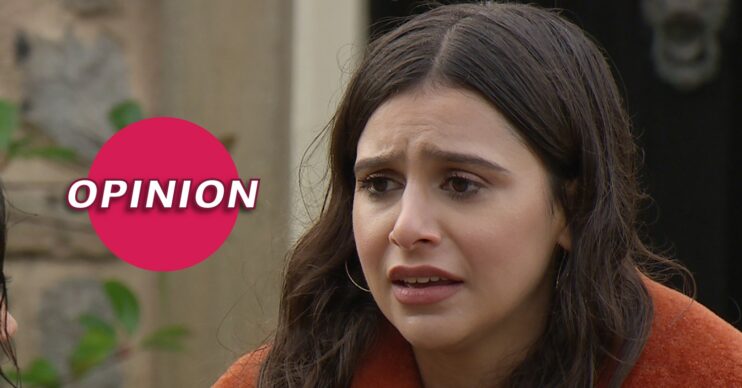 OPINION: Hats off to Emmerdale for admitting Meena’s killing spree is stupid

Emmerdale finally addressed how stupid Meena‘s killing spree was in last night’s episode (Wednesday, February 16), but was it the right decision?

This is what Entertainment Daily writer Charlotte Rodrigues thinks.

OPINION: Hats off to Emmerdale for admitting Meena’s killing spree is stupid

In last night’s episode of Emmerdale, Liam went after Meena with a pitchfork. Which you know, can’t blame him, she did murder his daughter and shoot his wife.

He chased her to the humpback bridge where Meena killed Leanna.

She said to Liam: “You know it’s funny. I’ve been so judgmental about how stupid people are when I’m chasing them – now look at me! Just like Andrea running into the maze.”

She continued: “Leanna was the stupidest, though. No offence.

“The thing is she really should’ve screamed the place down. That would have helped.

“Also, running away from the village wasn’t ideal. Did make my life a lot easier though.

“The kicker though were the shoes – those killer heels. Didn’t take them off, bless her. Literally died for fashion.”

For months, viewers have been making fun of how silly the murder scenes are.

Just catching up on Emmerdale, why doesn't Andrea you know, just…walk through the maze? It's just like grass or whatever 😅 #emmerdale

The Meena storyline in #Emmerdale is seriously lacking imo, it has no…… Excitement to it??
All of Leanna, Andrea and Ben have had literally the same sort of death(s)
They've found out the truth of her actions, only to be chased and then killed moments later
REALLY dull

It seems odd that that Leanna didn’t take off her shoes and try to run towards a more populated area.

Although I do have to say, I take my hat off to Emmerdale for addressing the stupidity of Meena’s killing spree.

Some of the deaths just made no sense and made the characters look completely stupid.

We know Leanna wasn’t an idiot and it would’ve made sense for her to run out of her house and towards her birthday party instead of away from the village.

She also would’ve taken her heels off, I mean I can barely walk in heels let alone run away from a murderer, but okay.

Andrea also wasn’t stupid. So why would she run into a maze when she was being chased by Meena, who she literally just witnessed trying to drown Victoria?

A MAZE IS LITERALLY THE WORST OPTION! Even the woods would’ve been better.

And don’t even get me started on Ben. Why would Ben go back to help Meena after she tried to kill him?

All three of them had common sense, but the way the murder scenes were written made it seem like they didn’t.

But at least Emmerdale has acknowledged that it’s all been a bit far-fetched. It’s a clever way to let the audience know they do pay attention to the fan feedback and they do have a sense of humour!

However, far-fetched or not, I absolutely love Meena!

I am actually really enjoying this week’s episodes and the storyline overall.

Meena’s one-liners have had me in stitches

Meena’s one-liners in Tuesday’s episodes (February 15) also had me howling.

She’s such a vile character, but her one-liners and the delivery of the lines is incredible.

Meena is truly awful, but her wit and sarcasm has really made this week so much more enjoyable.

I think my top two favourite lines were: “She’s not okay Dawn I just shot her, please keep up” and “I’m unhinged Billy, I’m not stupid.”

Now that is top tier writing. Shout out to whoever wrote those lines.

I always like to end my opinion pieces on a positive note. So I would like to give praise to the fantastically talented Paige Sandhu.

She plays Meena so well and as I said her line delivery is spot on.

The cast are all doing such an amazing job and I’m looking forward to seeing how it all ends.

Is it bad that I kind of want Meena to stick around though?