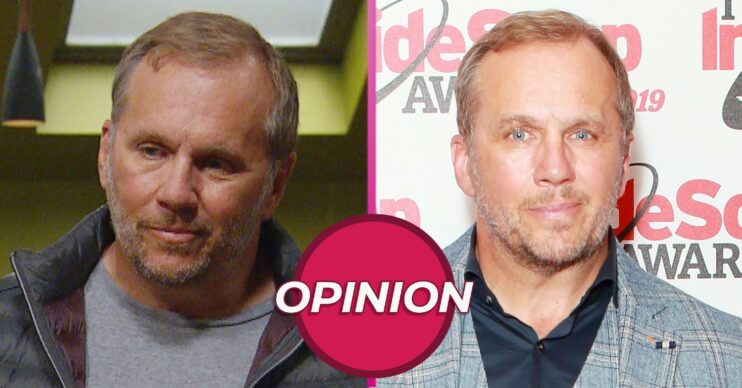 The actor deserves much better treatment from the soap's writers

It takes a lot to get our goat with soaps but Emmerdale is doing it by wasting the talents of Dean Andrews.

The Will Taylor actor has starred in the soap for the best part of three years – not that you’d know it.

He’s one of the country’s finest working class actors.

Whether it’s a heartbreaking death scene, or a comedy prat fall – Dean can do it all.

But as far as the soap seem to think all he’s good for is moping at Kim Tate and being mildly intrigued by his own daughter.

And to think it started off so well and so promisingly.

Arriving as a villain from Harriet Finch’s past, Will was an enigma.

He terrorised the then vicar Harriet for her betrayal of him when she was an undercover cop.

Emmerdale needs to give Dean Andrews a major plot – NOW

She had been tasked with putting him away for drug dealing while working undercover.

Sentenced to life in prison, when Will was released he blamed Harriet for everything that had gone wrong in his life.

And he wanted revenge and would stop at nothing to get it.

Will even went as far as to use his drug addicted prostitute daughter Dawn to help his evil campaign.

And then he fell back in love with Harriet. Standard for Emmerdale.

The pair grew closer and eventually found their way back – despite the villagers wondering why Harriet was shacking up with a man who sent her a coffin as a gift.

Bizarre, yes, but it was material that Dean could get his teeth into.

And then a bigger villain emerged and Dean was forced to play Will as a bit player and nothing more.

And goodness, it’s painful to watch.

Gone is the Will who arrived in Emmerdale full of promise.

When his daughter was kidnapped and grandson terrorised last week, it was all Dean could do to not yawn at Will’s reaction.

There was no rage, no insistence of revenge – he seemed bored.

And Dean is worth far more than this.

He deserves material that lives up to his talents. Sort it out Emmerdale – or you could lose him for good.