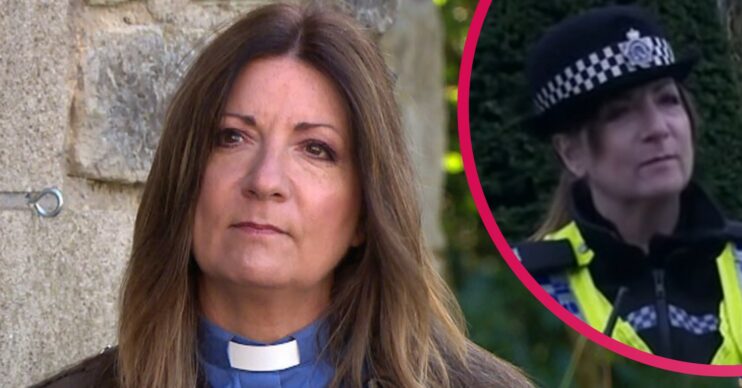 Who is Harriet in Emmerdale? How has she become a police officer again?

Harriet has gone from the village vicar to crime-fighting cop

Harriet Finch first appeared in Emmerdale in November 2013 as the new vicar.

But now she’s quit the church and has become a police officer again.

However, many fans are questioning how she can have rejoined the force given her history? And also, how it’s happened so quickly!

So just who is Harriet in Emmerdale? Who plays her? What is her past? And why is she back on the beat?

Who plays Harriet in Emmerdale?

Katherine appeared in many popular TV series’ and soaps before being cast in the ITV soap.

Between 2005 and 2006 she played Sally Hunter in Hollyoaks, and between 1996 and 2007 she played multiple different roles in Coronation Street.

She has also had roles in Doctors and in 2012, she played Annie in The Syndicate.

You may also have seen Katherine in Casualty and Scott and Bailey.

Who are Harriet’s family in Emmerdale?

Harriet’s mum is a woman named Mildred Finch, but she has never been seen on-screen.

Her mother is the cousin of Edna Birch, making Edna Harriet’s second cousin.

Whilst Dawn Taylor is not Harriet’s biological daughter, she is the closest thing to a mother Dawn has.

Harriet was a police officer before she came to Emmerdale. She worked undercover as a woman named Michelle and was in a relationship with Will Taylor.

At the time, Will was a drug smuggler, working for corrupt copper DI Malone.

After five years, Harriet shopped Will in and he went to prison. Meanwhile, Will’s daughter, Dawn, went into care.

At the time, Harriet was working with DI Mark Malone, but was unaware he was the ruthless leader of Will’s gang.

In 2018, Harriet, reunited with Dawn and the two eventually built up their relationship. However they both believed Will to be dead.

In 2019, Harriet was being stalked and it was revealed Will was alive and was stalking Harriet as revenge for getting him sent to prison.

Eventually they got back together. But in 2020, Malone came back into the picture and started to force Will into working for him again.

Who has Harriet dated?

When Harriet first arrived in Emmerdale, she befriended Dom Andrews.

However in 2014, Dom’s daughter Gemma fell unconscious after hitting her head in an argument with Belle Dingle.

Harriet found Gemma and called an ambulance. But it was revealed at the hospital she was brain stem dead and Dom made the tough decision to have her life support switched off.

Harriet felt guilty as she stopped Dom from calling Gemma on the night she died.

Although he was furious and lashed out at Harriet after Gemma’s death, he later apologised to her.

Shortly after Gemma’s death, he left the village.

Harriet briefly dated Ashley Thomas, but he went back to his ex-wife Laurel following his early onset dementia diagnosis.

Vicar Harriet continued her pattern of being attracted to bad boys and later went on to have a relationship with Cain Dingle.

However, despite their steamy affair they broke up as he realised he was still in love with his wife Moira.

When Will and Malone reappeared in her life, Harriet soon became aware that Malone had been forcing Will to commit crimes for him again.

But despite this she had an affair with him. When Dawn discovered the affair, she reported Malone to the police.

After finding out Dawn reported him, Malone tried to force her to take drugs and overdose. But when Harriet came in, she knocked him unconscious.

They thought he was dead, but he wasn’t and Malone got up and came at Dawn. She used his gun to shoot him in self-defence.

Despite Dawn wanting to call the cops, Harriet didn’t think they’d believe her and so they buried Malone’s body in a grave, on top of another man’s coffin, in the local cemetery.

They later confessed to Will what had happened and assured him the corpse would never be discovered.

However when the true occupant’s daughter wanted to exhume her dad’s body, Will and Harriet knew they needed to take action and moved him to the grounds of Home Farm.

Over Christmas 2021, Kim Tate had the body ‘disposed of’ to make sure Will knew he wasn’t tied to her. The location is currently unknown.

Harriet struggled to cope with the guilt of what they’d done and her mental health started to suffer.

Desperate to be punished, Harriet put herself in exile. She locked herself in the cellar with her bible and only Will knew where she was.

He desperately persuaded her to come out, but she refused for quite some time.

Once she did emerge, she disappeared from screens for several months, with the soap only mentioning that she’d moved in with Dan and Amelia.

Her experience with covering up a murder has, rightly, made Harriet rethink her future as a vicar.

Before Christmas she revealed she had reapplied to join the force again – despite her part in Malone’s death.

She performed her last church service on Christmas Day and by the beginning of January she’s already back in uniform!

Harriet explained on Wednesday night (January 5) that she was doing her beat training alongside PC Swirling.

But fans are confused by the whole career move and have a lot to say about it – mainly about how quickly it’s happened.

What are fans saying about Harriet in Emmerdale?

“Why has Harriet suddenly become a policewoman?” queried one.

Another added: “No way would Harriet be in uniform so quickly. Even if she was a detective before she’d still need to train again. It’s a long process!”

“Wtf – how did Harriet become a PC so SO quick?” asked a third.

A fourth agreed: “Harriet got into the police quick. Obviously fast-tracked her due to her extraordinary policing abilities, like not noticing something’s off at the Sharma residence.”

“Harriet already out in uniform after years out of the job. She was only thinking of applying a couple of weeks ago, no training or anything? Bit ridiculous isn’t it?” asked someone else.

Others weren’t convinced she’d immediately be placed in the village she lives in.

“FFS Harriet in a coppers uniform already and placed in the village where they only need one copper??” raged one.

Another agreed: “Oh please, is PC Harriet gonna be the only copper in the village now, bit like PC Tinker in Corrie?

“As if she’d be doing her training in the village where she lives and worked as a vicar until last week.”

“Harriet got that job quick and they put her on her home patch? Ludicrous,” said one more.

Some more viewers felt the whole thing is a bit “insensitive”.

One wrote: “Harriet rejoining the police is a bit insensitive?”

Someone else agreed: “Harriet joining the police? She can’t be serious.”