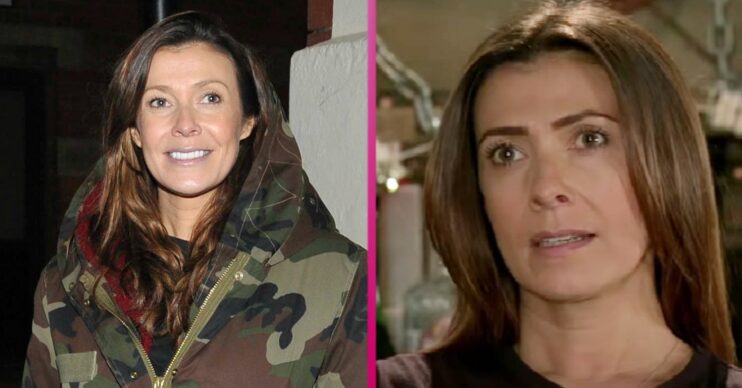 Michelle left the cobbles in 2019

Kym Marsh has confirmed she will one day return to Coronation Street, where she played Michelle Connor from 2006 until 2019.

Recently actress Kym appeared at the Pride of Manchester Awards to host the prize-giving ceremony.

While there she spoke about coming back to the ITV soap

Read more: Waterloo Road: What do we know about the new series and when is it coming back?

Kym Marsh confirms she will return to Coronation Street

Appearing on the red carpet at the ceremony, Kym was speaking to Daily Star about her future on Corrie.

She said: “Well, who knows? I mean, I’m in Waterloo Road now – I’ve just started filming for that.

“But you know I’ve got a real soft spot for Corrie, and one day I have no doubt I’ll set my feet on the cobbles again.”

Who is Kym Marsh playing in Waterloo Road?

Last year it was announced BBC school drama Waterloo Road would be coming back after the show came to an end in 2015.

In February 2022 cast members for the Waterloo Road reboot were revealed and it was announced former Corrie star Kym would be joining the show as Nicky Walters.

Nicky is a mother to two pupils at Waterloo Road and works in the school’s canteen.

Speaking about joining the new Waterloo Road series at the time, Kym said: “I’m thrilled to be joining the fabulous cast of Waterloo Road, it’s such a joy to get the opportunity to film in Manchester again and I can’t wait to get going.”

However Kym isn’t the only former Coronation Street star to be joining the cast.

Rachel Leskovac, who played Natasha Blakeman and Ryan Clayton, who played Josh Tucker, will also be in Waterloo Road.

What else do we know about the new Waterloo Road series?

The original series was set in Rochdale from series one to seven and from series eight to 10, it was filmed and set in Greenock, Scotland.