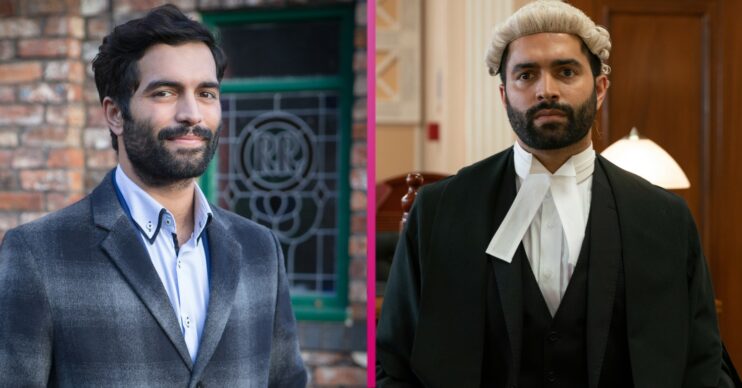 Imran Habeeb in Coronation Street: Could his dark secret drive him out of Weatherfield?

Lives will be ruined when the truth is revealed!

Imran Habeeb in Coronation Street is the kind-hearted cobbles legal eagle, with a flair for courtroom drama and a habit of making mistakes.

He is the brother of the late Rana Habeeb, who was killed in the factory roof collapse, and he’s newly engaged to Toyah Battersby.

So what’s his story?

He’d had roles in EastEnders and Casualty, as well as starring in television drama The Interceptor,  before he landed the part of lawyer Imran and joined Coronation Street in 2017.

Charlie often shares updates from his life on his Instagram account. He gets a lot of love from his pictures of his beloved labradors.

He also breeds guide dog puppies and shares the most adorable pics of the pups when they arrive.

Imran arrived in Weatherfield after the break up of his marriage to Sabeen. He moved in with sister Rana, but after her tragic death, it was Toyah he turned to.

The pair became a couple, though for a short time the legal love-rat was romancing both Battersby sisters at the same time!

Imran became a bit of a hero in the Street when he successfully defended Yasmeen Metcalfe after she was charged with attempting to murder her abusive husband Geoff.

When Toyah and Imran became more serious, they decided to start fostering children. Though their plans took a back seat for a while after the death of Toyah’s nephew, Oliver Battersby, they eventually persisted and took in Kelly Neelan.

When Seb Franklin was brutally murdered by Corey Brent, Kelly was right in the thick of the action. Though viewers later discovered she’d tried to stop Corey lashing out, Kelly was initially charged and stood trial for the killing, alongside Corey.

Imran defended Kelly in court – much to the disgust of his heartbroken neighbours.

Who did Imran sleep with?

When Corey Brent was found not guilty, and Kelly took sole blame for the crime, Imran drowned his sorrows with ex-wife Sabeen and didn’t come home to poor Toyah.

Viewers thought at first Imran and Sabeen had rekindled their romance. But then it was revealed Imran had slept with Abi Franklin.

Since then Abi’s tied the knot with Kevin Webster and had  a pregnancy scare, and now Kev knows she cheated – but not who with.

And Toyah knows Imran also had a one-night stand, and is similarly in the dark about who he slept with.

Charlie De Melo has announced he’s leaving Corrie later this year. Could his final scenes be anything to do with that explosive secret that’s just waiting to be revealed?

We wouldn’t be surprised!