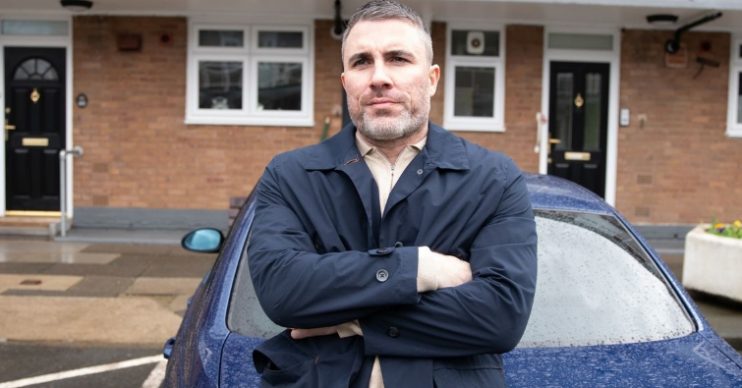 Viewers know that Rick was a loan shark who terrorised many Weatherfield residents, and was unscrupulous in his methods – charging his debtors extra money on a whim and threatening physical violence if they didn’t pay up!

Pottering around… Get it… Get it?? #loveadadjoke.

He first appeared in 2009, making Joe McIntyre’s life a misery and making threats against his daughter Tina.

Later, in 2012, Terry Duckworth was the one who owed Rick money.

When Rick forced Gary to work for him to pay off his debts, Gary eventually snapped and ended up killing Rick during a fight to the death in the woods.

Since leaving the soap, Greg has undergone a total transformation.

Sharing a photo on his official Instagram page, Greg joked around with his 2,384 followers making what he called “dad jokes”.

In the snap, Greg’s hair is much longer than that of his previous character, and is threaded with grey.

He’s also wearing a pair of spectacles similar to those of fictional wizard Harry Potter, and has grown a longer salt and pepper beard.

He wrote: “Pottering around… Get it… Get it?? #loveadadjoke.”

One follower said the look “suited him”.

We think it’s fair to say he looks unrecognisable from his mean Corrie character.

Greg has also appeared in The A List, Casualty, Emmerdale and Brookside.

In Hollyoaks, he played bad-boy gangster Trevor Royle who was stabbed to death on his wedding day by evil teen Nico Blake in 2016.

In real life, actor Greg is the brother of Matt Milburn who plays footballer Tommy Orpington in ITV soap Corrie.

Matt will be returning to Weatherfield as Tommy next month.

Would you like to see actor Greg Wood in another role? Leave us a comment on our Facebook page @EntertainmentDailyFix and let us know what you think!