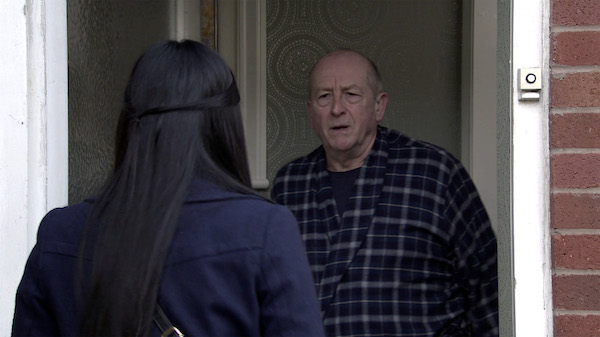 Viewers of Coronation Street are furious with “creep” Geoff Metcalfe, as he continues to torment Alya Nazir by writing nasty reviews online about her.

Fans of the soap were left raging as Alya was the target of negative feedback and low scores on restaurant Speed Daal’s website.

It doesn’t take a genius to realise that manipulative Geoff is the one behind the persistent abuse.

Viewers know that Geoff frequently gaslights his wife Yasmeen behind closed doors, belitting her, calling her names, undermining her and generally behaving like a pig.

On Wednesday (March 4), Alya confided in Geoff about the bad comments about their restaurant, which slate the food and the staff.

Of course, Geoff has been taking advantage of the situation – suggesting she is the target and it’s all her fault.

While Alya suspects dodgy businessman Ray could be behind the reviews, viewers are convinced it’s Geoff.

Is it all a ploy to make Alya doubt herself and her abilities? Well, he’s done a lot worse to Alya’s grandma, Yasmeen!

Those watching from home slammed Geoff for his actions, with one writing: “Geoff has written those bad reviews. I hope Ayla finds out. I think he’s taking Yasmeen’s money out of her account.”

Another said: “Geoff is such a vile cow. He is clearly doing the bad reviews. Corrie, we need to get rid of Gary, Geoff and Ray – such scum.”

A third added: “Ayla doesn’t know Geoff has her bank card. Those horrid reviews are Geoff again. Hope Ayla finds out what he’s up to.”

it's not Ray writing the bad reviews it's Geoff!
how dare he tell Yasmeen to shut up!
I can't stand that little creep!#Corrie

Me neither… he makes Phelan look like an angel 😇

Geoff is a troll now as well, it’s him leaving the bad reviews to try and manipulate her out. He is pure evil please end it soon #corrie

“It’s not Ray writing the bad reviews, it’s Geoff! How dare he tell Yasmeen to shut up! I can’t stand that little creep!” blasted another, while one more said: “That slime ball Geoff is doing the bad reviews #Corrie.”

Another even said Geoff was worse than serial killer Pat Phelan, and one said he was “pure evil”.

Ofcom recently received 359 complaints about Geoff after he forced his wife Yasmeen to eat her beloved pet chicken Charlotte Bronte.

He became annoyed when he returned home from work and Yasmeen hadn’t cooked his dinner.

He claimed that she cared more about her chickens than she did him and later committed the cruel act.

In other disgusting scenes, coercive controller Geoff locked Yasmeen in a box as ‘punishment’ for his own failings.

He’s also taken away her credit cards, convinced her she’s an alcoholic, hidden cameras in their house to spy on her and tried to stop her going out and having a life of her own.