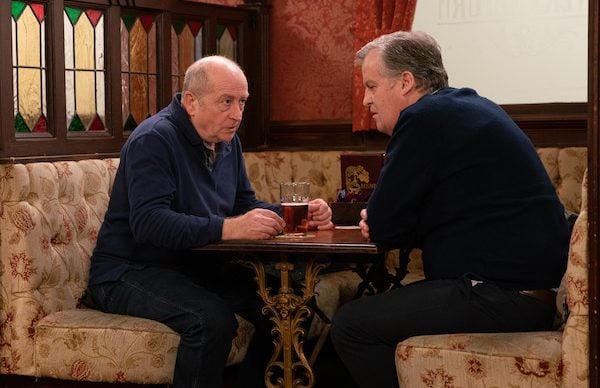 He wants to save his own skin when suspicions are raised

Evil Geoff Metcalfe ups his manipulation of wife Yasmeen in next week’s Coronation Street by involving her friends in his horrible lies and telling them she’s an alcoholic.

With Geoff’s coercive control getting worse and worse, can anyone save Yasmeen from her husband before it’s too late?

The latest obsession Geoff has is how clean Yasmeen keeps their house.

He even draws up a cleaning rota, ordering her to get cracking with polishing the house from top to bottom while he heads out.

Cathy is concerned when she sees her friend with a load of cleaning products from the shop and wanting to get to the bottom of what’s going on, suggests they have lunch and a bottle of wine at No.6.

Over lunch Yasmeen continues to insist she just likes a tidy house, but will Cathy buy her story?

Just as Yasmeen says she’s never been happier, Geoff returns home and he is not impressed by what he sees. A tipsy Yasmeen is immediately on edge, and sensing the mood, Cathy decides to leave.

No sooner is Cathy out of earshot than Geoff’s laying into his wife for not doing her chores and getting drunk instead. He even reveals he left a mark on the skirting board to catch her out. Sickening.

While the row escalates, they end up in a tussle over the vacuum cleaner and Geoff falls and hits his face.

In the midst of the commotion, Cathy, who’s forgotten her bag, returns to collect it and witnesses Geoff launching into another tirade at Yasmeen.

Shocked Cathy hurries out, and soon tells partner Brian her fears for her friend.

As Geoff manipulates Yasmeen with an apology and state-of-the-art vacuum cleaner, Yasmeen ends up spending the whole night cleaning the house.

He congratulates her on a job well done, but when Cathy arrives wanting to know about Geoff’s black eye, Geoff suddenly realises he has to do some serious damage limitation if he wants to keep control of his wife.

Brian talks to Geoff about his worries, and a seething Geoff lies that Yasmeen is an alcoholic and he’s trying to help her get clean.

When Brian assumes she gave Geoff the black eye in a drunken rage, Geoff doesn’t correct him.

When Peter invites Yasmeen to a meeting with him, and Geoff piles it on thick with another lie that his first wife was a violent drinker and it’s dredging up awful memories for him, Yasmeen agrees to give up the booze.

But later Brian and Cathy break the news of Yasmeen’s ‘drink problem’ to Alya, who finds the whole thing totally laughable. Will she be able to convince her gran Geoff’s a wrong’un?

With Geoff suggesting Yasmeen doesn’t go to work as the temptation to drink might be too much, he’s successfully got her to stay in the house where he can keep an eye on her over the CCTV.

Can anyone save Yasmeen?