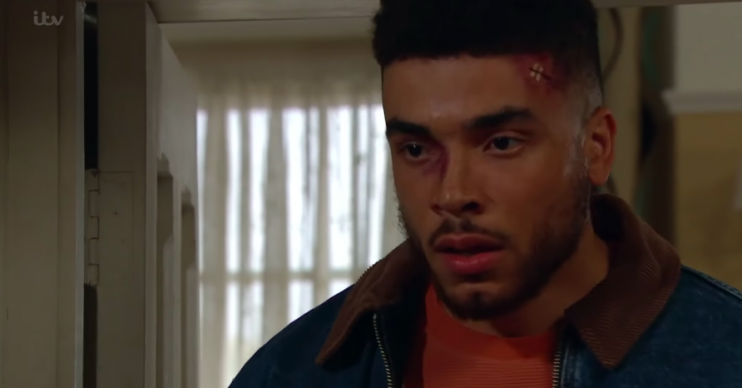 Host Lorraine Kelly sat down with Ria to discuss upcoming films, dramas and what’s happening in the soaps.

As they began speaking about soaps, Ria said: “I want to talk about Emmerdale, because it’s the aftermath of Nate’s death and detective inspector Malone is growing very suspicious of Cain.”

However fans of the ITV show were quick to point out that although Nate was shot, he didn’t die.

Either she’s made a mistake or has released a spoiler on #Lorraine regarding #Emmerdale. What did she mean tonight’s episode is the aftermath of Nate’s death? He’s not dead? @reallorraine pic.twitter.com/hWbzNYn3aa

In recent episodes, Nate was shot after his dad Cain Dingle mistook him for a rustler.

Nate ended up in hospital and needing surgery however he survived and was eventually sent home to recover.

Nate covered for Cain telling police it was rustlers who shot him and ever since they’ve been looking for the gun, which belonged to Will Taylor before his girlfriend Harriet gave it to Cain to get rid of.

With the gun buried in a field, Cain and Moira have been thinking they could get away with what happened. However it doesn’t look like it will be as easy as they hoped.

In last night’s episodes (Thursday March 5 2020), viewers were introduced to DI Malone and it’s clear he has a history with Will.

Next week, Cain is suspicious when he finds a package hidden in Malone’s car and confronts Will.

Will confesses what Malone is up to, and Cain decides to take Malone on. But he is soon left regretting his actions…

Later Cain finds the garage trashed and discovers Moira’s bull has been murdered.

Cain’s left shaken, but is this just the start of Malone’s warnings?

Did you notice the blunder on Lorraine? Leave us a comment on our Facebook page @EntertainmentDailyFix and let us know what you think!