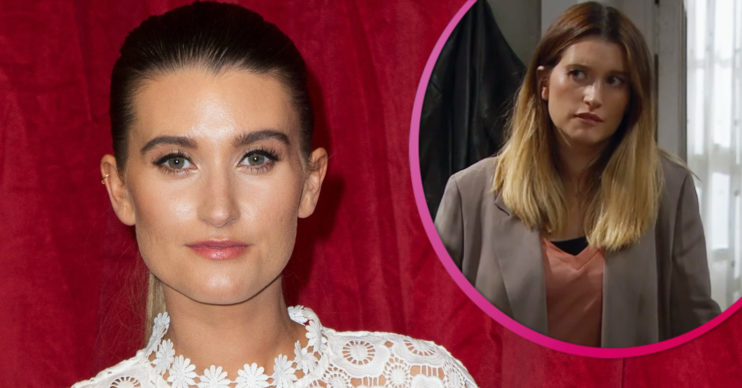 The soap star has been busy during maternity leave

Charley Webb has teased fans with an exciting project which has been in the pipelines for 10 years.

The Emmerdale star, 32, left her 466k followers guessing over her new mystery venture on Instagram.

Charley filmed herself in the car as she revealed she had been working from home ahead of its launch.

What is Charley Webb working on?

Dressed in a casual black hoodie, she said: “Some exciting news. I’ve working at home all day today because we’re launching our own business, which I am so excited about.

“I’m not going to tell what it is yet because we’re not quite at the launch point because everything going on, lockdown etc. But we’re almost there, so I don’t want to jinx it.”

The Debbie Dingle star went on to reveal that the idea first came about after her eldest son was born.

She continued: “We had the idea of something similar for like 10 years when Buster was first born.

“But we just didn’t have the time, so we had to box it and put it away. And now we’ve started it again. It’s changed since 10 years ago because things do change.”

Charley concluded her post, saying: “I’m so excited. I can’t wait to tell you all and share it with you.

“Hopefully you’ll be able to come on a little journey with us. I can’t wait!”

Charley marked the occasion on Instagram, sharing a photo of Ace sitting in a basket surrounded by some of his wonderful presents.

She captioned the post: “I can’t believe Ace is one today. I feel so lucky to have spent a whole year at home getting to know him, one of my favourite years so far.

Charley also shared pictures from Ace’s day on her Instagram Story, revealing she had a miniature soft play set up in the garden.

She wrote: “The kids have really missed soft play since lockdown. So we brought it to us.”

Charley opened up on the hardships of raising a family online, admitting: “Some days are stressful.”

She also encouraged her followers not be too hard on themselves, adding: “Little family. Today has been such a lovely Sunday.

Some days are stressful from start to finish

“We’ve been for a long walk and this afternoon we’re having a roast with our little bubble (@missemmaatkins).

“Some days are not like this though, some days are stressful from start to finish and I’m really not just saying that.”

Back in May of this year, the mum of three revealed she isn’t quite ready to return to work as she is focused on motherhood.