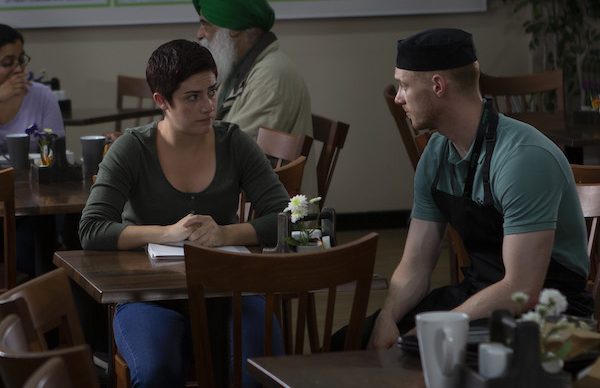 Is he going to hurt Victoria?

The mystery man showed up a few weeks ago, and clearly showed an interest in Vic – but is he genuine or is there something more sinister afoot?

On Wednesday (September 18), the handsome stranger turned up again – this time working in the canteen at the hospital where Victoria is having her pregnancy check-ups.

But also, where her rapist Lee has been recovering from the coma that Vic’s brother Robert put him in.

Luke immediately began flirting with her once again, keen as mustard.

Despite her lack of trust in men after her horrifying rape ordeal, Vic confided in the handsome newcomer.

After finding out her unborn baby is a boy, Victoria was worried that he might grow up to be like his rapist dad.

As Luke listened to Victoria’s concerns, he came across as one of the good guys – but some fans weren’t convinced and believe he is connected to Vic’s rapist Lee.

#Emmerdale I'm still convinced that mystery bloke in hospital is some relation to Lee the rapist. Funny how he turns up when Lee's mum just happens to stay away. 🤔🙄

That bloke has something to do with Lee. I'm sure.#Emmerdale #Robron

I don't know what to think about Victoria's new friend… #emmerdale

One wrote: “I’m still convinced that mystery bloke in hospital is some relation to Lee the rapist. Funny how he turns up when Lee’s mum just happens to stay away.”

Another agreed, saying: “That bloke has something to do with Lee. I’m sure.”

A third typed: “I don’t know what to think about Victoria’s new friend…”

Not everyone thought he was dodgy, though, with one tweeting: “I like Vic‘s sweet hospital friend #Emmerdale.”

Victoria first met Luke last month, when the mystery man began talking to her at the hospital, and the chat soon became flirty.

Chef Victoria, who is pregnant with rapist Lee Posner’s baby, initially freaked out by the attention she got from Luke.

However, he was just trying to tell her that she’d forgotten her purse.

After she’d calmed down and had a heart-to-heart with Diane, Victoria realised why she’d overreacted and apologised to the stranger when she later bumped into him again.

After he refused to leave her alone, Vic’s brother Robert beat him up, leaving him in a coma.

Robert is now facing prison for the assault.