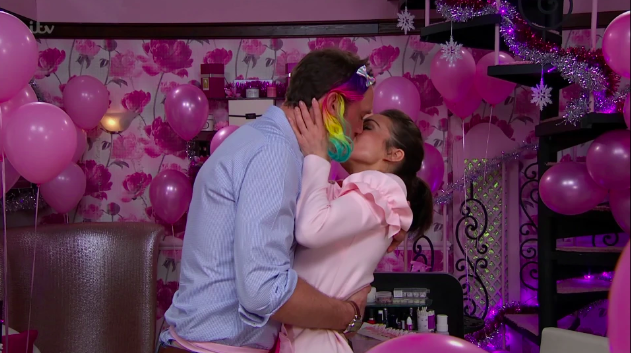 It marked the end of Liam and Bernice's engagement...

Leyla Harding’s New Year’s resolution to bag herself a man became a reality last night – but not all Emmerdale viewers were happy for her.

On Thursday (January 2), she finally shared a forbidden kiss with handsome doctor Liam Cavanagh, despite him being engaged to Bernice Blackstock.

Soap fans know that Liam – previously married to teacher-turned-groomer Maya Stepney – was set to marry Bernice at the end of last year.

However, she was forced to leave the village before the wedding when she heard the tragic news that her ex and father of daughter Dee Dee had been involved in a tragic accident.

Putting her daughter first, Bernice said goodbye to Liam – but promised him she would be back.

But fans knew it was unlikely…

Since Bernice’s departure, Leyla hasn’t been shy in coming forward – and shared a kiss with Liam in the salon.

But the kiss couldn’t have come at a worse time, when Liam received a watch from Bernice with the inscription: “Separated by distance, united by love. Liam and Bernice forever.”

As Leyla “mooned over Liam like a lovesick teenager”, Liam was wrestling with his conscience and made the decision to come clean to Bernice immediately.

Finding Leyla in the village, he told her that things were over between him and his fiancée.

He said: “I couldn’t keep her in the dark any longer. I just got off the phone with Bernice.

“I had an honest conversation. I told her everything. It’s over. She ended our relationship.”

And fans were divided as Leyla and Liam seem destined to embark on a relationship.

One fan wrote: “Leyla and Moira in competition for getting around the village. There’s no one else to throw Leyla with so just chuck her at Liam and see if it sticks. Shaking my head.”

Leyla and Liam are probably a sweet couple in the making but isn't a bit soon Bernice has been gone only a few weeks. #Emmerdale

Others slammed Leyla as “desperate” and said the union was “too early” after Bernice’s departure. Some prefer Leyla with David, with one typing: “David and Leyla… yes! They both have such a similar disposition and great chemistry.”

However, others were all for the new romance, with one tweeting: “Would love it if these two got together.”

Another added: “They’re brilliant together. So funny.”

A third said they “shipped” the new romance, while another added: “I am absolutely, 100% here for Liam and Leyla. #Emmerdale.”

I am absolutely, 100% here for Liam and Leyla. #Emmerdale

On another note I’d like to announce that I ship Leyla and Liam. #Emmerdale

The door has been left open for character Bernice to return one day.

Do you think Liam and Leyla make a good match? Leave us a comment on our Facebook page @EntertainmentDailyFix and let us know what you think!